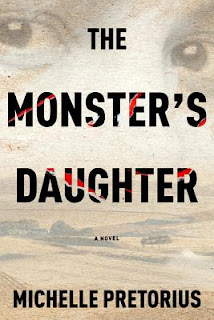 FTC Disclosure: I was given a copy of this book for review

Summary (from the back of the book): Somewhere on the South African veldt, 1901: At the height of the Boer War, a doctor at a British concentration camp conducts a series of grim experiments on Boer prisoners. His work ends in chaos, but two children survive: a boy named Benjamin and a girl named Tessa....

One hundred years later, a disgraced young police constable is reassigned to the sleepy South African town of Unie, where she makes a terrifying discovery: the body of a young woman, burned beyond recognition. The crime soon leads her into her country's violent past--a past that includes her father, a high-ranking police official under the apartheid regime, and the children left behind in that long-ago concentration camp.

Review: It is so my MO to say yes to a review and then by the time I read the book I've forgotten what it's about! I kind of like that; going in blind with no idea what is coming.

The Monster's Daughter, whose title is revealed in the text of the last few pages in a very clever way, is really good on so many levels.