Review: It Ain't So Awful, Falafel by Firoozeh Dumas 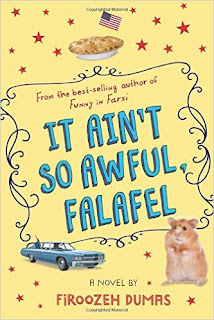 FTC Disclosure: I borrowed this book from my library

Summary (from the back of the book): Zomorod (Cindy) Yousefzadeh is the new kid on the block... for the fourth time. California's Newport Beach is her family's latest perch, and she's determined to shuck her brainy loner persona and start afresh with a new Brady Bunch name. It's the late 1970s, and fitting in becomes more difficult as Iran makes US headlines with protests, revolution, and finally the taking of American hostages. Even mood rings and puka shell necklaces can't distract Cindy from the anti-Iran sentiments that creep way too close to home.

Review: The Iranian Hostage Crisis (known as the Conquest of the American Spy Den in Iran!) is one of my first vivid "historical" memories. I was a 9th and 10th grader when it happened and I remember following it, discussing it, etc so this book appealed to me from the start.

Dumas is funny. And poignant. And knows just how it feels to be a tween going through regular stuff as well as added "foreign girl stuff." I was immediately pulled into "Cindy's" world of school, friends, cranky neighbors, and misdirected Iranian hatred.

I liked the way the author weaved the historical Iranian crisis into Cindy's every day life. But we also feel the family's struggles as the mom refuses to leave the house since she doesn't speak English, the dad's anguish as he is fired from his job since he is Iranian, and Cindy's longing to just be American and not "the Iranian girl." For a novel that deals with tough issues, it is surprisingly fun and light, which I think will make it appeal to junior high and high school students. The main character is only twelve years old, but I think high school students will like it anyway. I kind of forget she's that young!