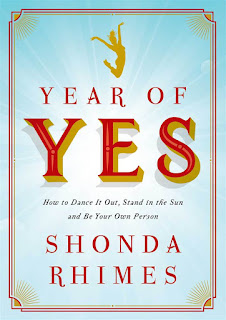 Title: Year of Yes: How to Dance it out, Stand in the sun, and be your own person
Author: Shonda Rhimes
Year Published: 2015

Summary (from the back of the book): With three hit shows on television and three children at home, Shonda Rhimes had lots of good reasons to say no when invitations arrived. Hollywood party? No. Speaking engagement? No. Media appearances? No. And to an introvert like Shonda, who describes herself as "hugging the walls" at social events and experiencing panic attacks before press interviews, there was a particular benefit to saying no; nothing new to fear.

Then came Thanksgiving 2013, when Shonda's sister Delorse muttered six little words at her: You never say yes to anything. Those six words became a wake-up call--and a challenge. Soon thereafter, Shonda began her Year of Yes project: she committed, for one year, to say Yes. There were terrifying public Yeses--Yes, she would give the commencement address at Dartmouth in front of ten thousand graduates and their families, and appear on Jimmy Kimmel Live. there were the excruciating private Yeses--Yes, should start taking her health seriously, and force herself to have difficult conversations about relationships adn situations that were holding her back. and there were--perhaps most difficult and meaningful of all--the Yeses that required her to explore, empower, applaud and love her truest self. Yes.

Review: My friend, Dawn, from college (go CONN!) visited last weekend and it was great to see each other and catch up. She stayed at my house and brought me this book since she was enjoying it so much. It isn't usually the type of book that I read, but Dawn and I have been friends since the mid-1980s and she knows me well so I dove right in.

Before I began the book, I must admit that I felt my problem isn't saying "no" to things. In fact, I usually feel I need to say no more often. However, the author points out that she is good at saying yes at work (as am I), but it was in the other areas of her life that she says no. For example, say yes to going to an awards banquet, say yes to giving a speech, say yes to an interview, etc. She found that putting herself out there meant she got better at it and actually enjoyed doing things outside of work and being a mom. I am going to have to remember this when my daughter goes off to boarding school next year and I am on my own again!

My favorite chapter is the one where she talks about learning to say yes to compliments and feeling good about one's accomplishments and strengths. She is so right on with this; women especially are not good at accepting compliments. Think about it, when someone says we did something well, we tend to say thank you and then qualify it (I was lucky, I had help, someone else bought this for me, etc). Why can't we just say Thank you! and smile. I finished this book last night and told myself that's the one I'd work on, then this morning at work someone praised me and my response was, "really?" Ugh. I definitely need to work on this one!