Review: Among the Heroes by Jere Longman 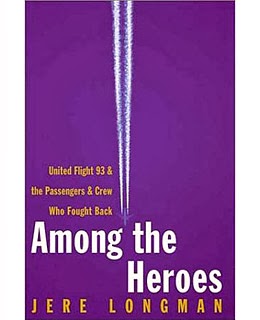 Summary (from the back of the book): Of the four horrific hijackings on September 11, Flight 93 resonates as one of epic resistance. At a time when the United States appeared defenseless against an unfamiliar foe, the gallant passengers and crew of Flight 93 provided for many Americans a measure of victory in the midst of unthinkable defeat. Together, they seemingly accomplished what al the security guards and soldiers, military pilots and government officials could not--they thwarted the terrorists, sacrificing their own lives so that others might live. This is the culmination of hundreds of interviews with family members and months of investigation.

Review: September 11, 2001 is so clear in my mind. I remember turning on the TV as we were getting ready for work and seeing the first of the towers in flames. I was holding my 11-month old baby and thought what type of world am I bringing her into?! Then I looked out the bedroom window only to see my neighbor doing the exact same thing. Talking to my students that day at school/work was surreal.

It's taken me this many years to be able to read a book about that day and I thought a book about the one flight that had some level of a positive story would be the easiest to handle. Obviously, the book isn't a happy one, but it isn't all death and destruction either. The author weaves stories about the 40 passengers and crew in amongst what we assume happened during Flight 93. Once you read about the people who were on board, it is less surprising that they are the ones who did something to the terrorists. Many of those aboard were tall, strong, athletic and trained in martial arts.

Reading a book like this is like reading a book about the Holocaust, it makes me think what I would do in that situation. Unfortunately, I don't think I would have been as strong and brave as the Flight 93 passengers and crew. Hearing about their phone calls to loved ones and the plans they said they were making is quite amazing.

If you have any interest in the events of September 11 and Flight 93 I recommend this book.