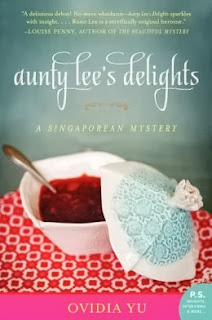 
FTC Disclosure: I received this book from the publisher for review as part of a TLC Tour

Summary (from the back of the book): After losing her husband, Rosie Lee could easily have become one of Singapore's "tai tai," an idle rich lady devoted to mah-jongg and luxury shopping. Instead she threw herself into building a culinary empire from her restaurant, Aunty Lee's Delights, where spicy Singaporean home cooking is graciously served to locals and tourists alike. But when a body is found in one of Singapore's beautiful tourist havens, and when one of her wealthy guests fails to show at a dinner party, Aunty Lee knows that the two are likely connected.

The murder and disappearance throw together Aunty Lee's henpecked stepson Mark, his social-climbing wife Selina, a gay couple whose love is still illegal in Singapore, and an elderly Australian tourist couple whose visit--billed at first as a pleasure cruise--may mask a deeper purpose. Investigating the murder is rookie Police Commissioner Raja, who quickly discovers that the savvy and well-connected Aunty Lee can track down clues even better than local law enforcement.

Review: By the end of this book I quite enjoyed it, but it really took me quite a bit to get there. Partly this is because the opening couple of pages are in great need of an edit and it just threw me off (granted I did read an uncorrected proof). Another reason is that I read it over too much time. I think it would be better in just a couple sessions.


All in all not my favorite mystery ever, but a fun read.