Review: Those Who Save Us by Jenna Blum 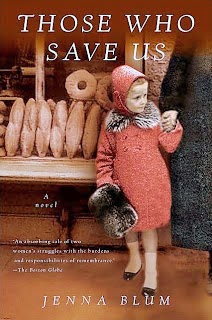 Title: Those Who Save Us
Author: Jenna Blum
Year Published: 2004


FTC Disclosure: I received this as a gift

Summary (from the back of the book): For fifty years, Anna Schlemmer has refused to talk about her life in Germany during World War II. Her daughter, Trudy, was only three when she and her mother were liberated by an American soldier and went to live with him in Minnesota. Trudy's sole evidence of the past is an old photograph: a family portrait showing Anna, Trudy, and a Nazi officer. Trudy, now a professor of German history, begins investigating the past and finally unearths the heartbreaking truth of her mother's life.

Review: I have read a lot of Holocaust literature. A lot. And this one touched on issues that I haven't read much about so that was a nice surprise. It is also a good story with strong characters.

Blum does a great job of making the reader care about the characters from the start. Jews who are dealing with ever-increasing restrictions, an Aryan woman living with her difficult father, and secondary characters who round out the landscape of early World War II in Germany. Sections of the book alternate between Anna (the mother) and Trudy (the child) during the war and the two of them in present day allowing the reader to see how the characters change over time and how the early events have affected them in later life.

Most Holocaust literature covers the same general topics: ghettos; camps; resistance groups. What I liked about this book is that camps and resistance were covered a bit, but the main emphasis was on women in Germany. How did regular Germany women survive and raise children when they didn't support the Nazis? To what lengths would they go to save their children and ensure their survival? Sometimes the answer isn't what I wanted to hear.

This book is intense, interesting, informative, emotional, and made me angry at humanity. Any book that has all that must be good!