Review: No Choirboy by Susan Kuklin 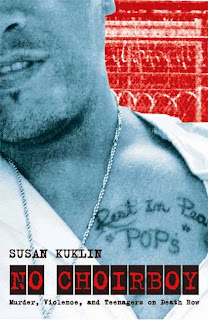 Summary (from the inside flap of the book): Until recently, only eight countries in the world still sentenced people younger than eighteen to death for their crimes--Iran, China, Nigeria, the Democratic Republic of Congo, Sudi Arabia, Yemen, Pakistan, and the United States of America.

No Choirboy takes readers into American prisons and allows inmates sentenced to death as teenagers to speak for themselves. In their own voices--raw and uncensored--they talk about their lives in prison and share their thoughts and feelings about how they ended up there. Susan Kuklin also gets inside the system, exploring capital punishment itself and the intricacies and inequities of criminal justice in the United States.

Review: This book is always checked out of my school's library so I haven't had a chance to read it until now though it has been on my "to read" list for a long time. Now that it is summer vacation and students had to turn in their books, I got my chance.

This book has been invading my thoughts for the past few days as I read it. I will be honest and say that I have never supported the death penalty because I don't see how killing one person is justified to prove that killing someone is wrong. I don't want to debate that here, but you should know that's my feelings. This book didn't solidify those feelings and that is certainly not the intention of the book.

Kuklin interviewed a few men who are on death row, not about their crimes (were were off limits to talk about), but about what it is like to be on death row, how they feel about their situation and other inmates, and how they spend their time. They were all under eighteen when they were sentenced to death so have grown up on death row, being taken care of by the older inmates. They talk a lot about what they've learned, how they have avoided (or not avoided) homosexual activity, the education they've pursued, the fights and avoiding fights, and the friendships they've formed with other inmates. They talk of family, loneliness, the food, sunshine, exercise time, and more.

Other chapters include interviews with the family of someone who was executed, a victim's family, and a lawyer who represents two of the death row inmates featured in the book. I think these chapters are also really important since they give a well rounded look at the impact of putting teens on death row. None of it is glorified, no one side is blamed more than the others. Through reading this book I feel like I have a true sense of there never being just one side to the stories we hear in the news. And, honestly, I found myself having opposing viewpoints as I read: they committed a crime and got what they deserved (a lifetime in prison that includes suffering) to how is this experience fixing anything. I don't have a solution.