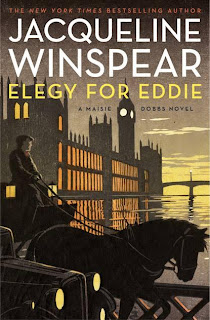 
FTC Disclosure: I was given this book by the publisher for a review as part of a TLC Tour

Summary (from the inside flap of the book): Early April 1933. To the costermongers of Covent Garden--sellers of fruits and vegetables on the London streets--Eddie Pettit was a gentle soul with a near-magical gift for working with horses. So who would want to kill him...and why?

Maisie Dobbs' father, Frankie, had been a costermonger, and she remembers Eddie fondly. But is soon becomes clear that powerful political and financial forces are determine to prevent her from learning the truth behind Eddie's death. Maisie's search for answers on the working-class streets of Lambeth leads her to unexpected places and people: to a callous press baron; to a has been political named Winston Churchill, and, most surprisingly, to Douglas Partridge, the husband of her dearest friend, Priscilla. As Maisie uncovers lies and manipulation on a national scale, she must decide whether to risk everything to see justice done.

Review: I have only ever read the first Maisie Dobbs novel and I remember liking it very much, but for some reason didn't read the remaining books in the series. So, when I was approached by TLC Book Tours to read the latest Maisie Dobbs adventure I was excited to say "yes!"

I read a lot of YA novels since I work as a high school Teacher Librarian. What I really enjoy about Jacqueline Winspear novels is that the writing is gentle. In an era of YA lit that is dystopian, violent, drug-filled, etc it is so refreshing for me to read a novel in which the characters are polite (even when being nasty), call each other Miss and Mr, and don't know all about one another. Yes, Maisie lives in another era (1930s Britain) and Winspear captures that era well.

I am a huge fan of the inter-war years and I think that helped contribute to my enjoyment of this book. The way she built up the possibility of another world war, the rise of airplanes and cars versus the use of horses, and the differences in classes in England was all very interesting.

And Maisie Dobbs is at heart a mystery, but what I like about Winspear is that she has so many other facets to her novels. The mystery is definitely there throughout, but the many paths she takes to get to the answer are fascinating.