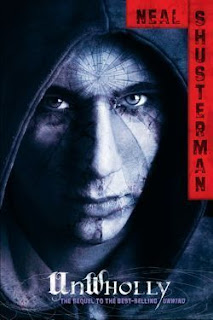 
FTC Disclosure: I borrowed this book from my school's library

Summary (from the inside flap of the book): Thanks to Connor, Lev, and Risa, and their high-profile revolt at Happy Jack Harvest Camp, people can no longer turn a blind eye to unwinding. Ridding society of troublesome teens and, in the same stroke, providing much-needed tissues for transplant might be convenient, but its morality has finally been brought into question.

Connor has his hands full running the Graveyard, a safe haven for AWOLs, kids like him who escaped unwinding. Risa, paralyzed from the waist down after the attack on Happy Jack Harvest Camp, is afraid that she may be more of a burden than a help. And Lev finds himself involved in an underground movement to rescue tithes, where he is practically worshiped as a god.

Review: I really enjoyed reading Unwind a few months ago so when the second book in the planned trilogy came out, I had to read it. It is definitely worth it and I will read the third one as well!

Shusterman picks up right where he left off in Unwind with the AWOLs fighting to stay safe in the airplane graveyard with Connor in charge and Risa acting as local doctor. Lev, the tithe, is on the run, trying to help other tithes, but realizing that his notoriety may hurt them.

The plot is face-paced with nothing extra to bog the reader down. I care about the all of the characters in these books and like to hate the nasty ones. Shusterman has created a microcosm of society within each setting of Unwholly; there are power plays, deceptions, double agents, friendships, those who are greedy, and those who do good deeds.

The introduction of Cam is startling. Watch out... here comes a spoiler.... He is created from 99 unwound kids who were chosen so as to create the "perfect" human being: brilliantly intelligent in all facets, strong, multi-lingual, etc. His hair and face reflect the races of the world. But is he human? He wasn't "born," he was created.

Shusterman does a great job at taking issues that we are dealing with today: cloning; genetic engineering, abortion, religious and secular morals, and puts them in a world that, at first, seems far fetched. Once you read more and start to mull the book over, it doesn't seem so out-of-the-realm-of-possibility and that is what makes it so scary.