Review: The Woman Who Fell from the Sky by Jennifer Steil 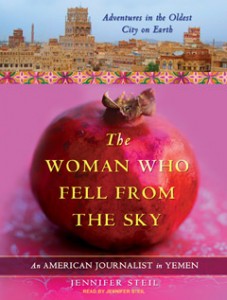 Title: The Woman Who Fell from the Sky: tales from the oldest city on earth

Summary (from the inside flap of the book): In a world fraught with suspicion between Middle East and the West, it's hard to believe that one of the most influential newspapers in Yemen,--the desperately poor country that has made international headlines for being a terrorist breeding ground--would be handed over to an agnostic, Campari-drinking, single woman from Manhattan who had never set foot int eh Middle East. Yet this is exactly what happened to journalist Jennifer Steil.

Restless in her career and her life, Jennifer, a gregarious, liberal New Yorker, initially accepts a short-term opportunity in 2006 to teach a journalism class to the staff of the Yemen Observer in Sana'a, the beautiful, ancient, and very conservative capital fo Yemen. She ends up staying longer, making life-long friendships, and meeting the love of her life.

Review: As hostess for the Middle East Challenge I have been bad. I haven't read nearly as many books this year by Middle Eastern authors or books that are set in the Middle East. And, this book has been on my TBR shelf for such a long time. I am glad that I finally got around to reading it because it is very interesting.

I have spent some time in the Middle East, only in the United Arab Emirates and Oman, both of which are at the southern end of Arabia. This book is set in Yemen, neighbor to Oman, so I expected to be familiar with the cultural aspects of the authors' tale. But, it turns out Yemen is quite different from both Oman and the UAE. I was surprised to hear about all the qat chewing that goes on. Well, at least by the men. It interferes with their work duties, wrecks their teeth, and really gives them a high. About 2/3 of the way through the book the author finally realizes it's a drug to which the male members of her staff are addicted.

The stereotype of middle eastern/Arab women is that they are oppressed. I am not going to really go into that here, since life for women in that region really depends on so many issues (country, family, rural vs. urban, government laws, etc). However, the women in this book really are conflicted. Yemen does not make them cover or wear the hijab, but almost 100% choose to do so. They feel they are safer from the prying eyes and hands of the men if they are covered. The women on the staff of the Yemen Observer are much better employees than the men: they work longer and more regular hours; are not addicted to qat; are more eager and open to learning how to be professional journalists; and are far more restricted in their activities (they must leave work by 3:00pm to be home, cannot interview males on their own, etc). So I came away with a really mixed but interesting message on the Yemeni culture.

The author's writing style is easy to read, pulls the reader in quickly, is funny at times (wait until you read what a friend from New York mails her!), and really gave me a sense of what her life in Yemen was/is like. I also liked that she doesn't assume that her experiences are what it is like for all Yemenis. She tells her own story without making too many umbrella statements about the country as a whole.