Review: When the Emperor was Divine by Julie Otsuka 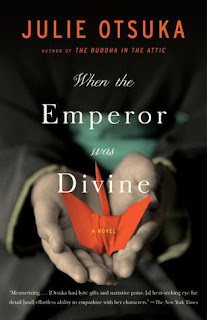 Title: When the Emperor was Divine

Summary (from the back of the book): On a sunny day in Berkeley, California, in 1912, a woman sees a sign in a post office window, returns to her home, and matter-of-factly begins to pack her family's possessions. Like thousands of other Japanese Americans they have been reclassified, virtually overnight, as enemy aliens and are about to be uprooted from their home and sent to a dusty internment camp in the Utah desert.


Review: I really enjoyed Otsuka's book Buddha in the Attic and had high hopes for this one as well, however, this one didn't capture my attention the way Buddha did. There are similarities between the two books in subject matter (Japanese in California, discrimination, family) and in writing style (we don't really know the characters' names and the narration changes), but the plot didn't capture me as much in this one.

It is 1942 in California and we learn that the father of the main family has already been taken away in his pajamas by the FBI as an enemy though his family has no idea what he did. He is Japanese in the wake of the Pearl Harbor bombing. The narration begins with the mother seeing the signs informing Japanese Americans that they must pack up their belongings and move. She is so matter of fact, packing up the house and is sure that though it is all a mystery, it will work out in the end. She keeps it together for the sake of her children, but when they return (and her narration returns) she realizes that nothing is alright.

The narration done by the two children is poignant. Otsuka does a fantastic job of showing the discrimination they felt and saw and how it must have been for Japanese American children who grew up in the desert internment camps in Utah. Returning home made them so happy, but nothing was the same: this family kept their house, but it was ruined, their friends are no longer their freinds, and their father is still missing.

The section that I liked the most was the end when the father did return to the family home. It would have been so easy to make it a positive time for the family since they were back in their home, reunited and could move on now that the war was over. However, Otsuka showed the devastating impact that events had on this family. The mother has a menial job (he promised she'd never have to work); the father is unemployed, physically and mentally beaten; and the children are ostracized. What amazes me is the fact that Otsuka paints a devastating picture of this family's experiences, but the writing is gentle and well done.