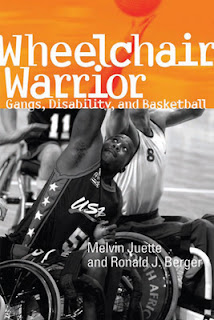 Summary (from the back of the book): Melvin Juette has said that becoming a paralyzed in a gang-related shooting was "both the worst and best thing that happened" to him. The incident, he believes, surely spared the then sixteen-year-old African American from prison and/or an early death. It transformed him in other ways, too. He attended college and made wheelchair basketball his passion--ultimately becoming a star athlete and playing on the US National Wheelchair Basketball Team.

In Wheelchair Warrior, Juette reconstructs the defining moments of his life with the assistance of sociologist Ronald Berger. His poignant memoir is bracketed by Berger's introduction and conclusion, which places this narrative of race, class, masculinity, and identity into proper sociological context, showing how larger social structural forces defined his experiences. While Juette's story never gives in to despair, it does challenge the idea of the "supercrip."

Review: I have now read two non-fiction books in a row that are about African American male gang members from Chicago (the other is Gang Leader for a Day) that have a sociological component to them. They are similar and also very different.

While this book is mostly a memoir of Melvin's experiences in a Chicago gang and his his life after the shooting that paralyzed him, it is also a sociological study of race and circumstance. One does not need to read these chapters to appreciate the Melvin's story and its significance.

Melvin comes from a good home with parents who cared and provided a house, schooling, and a positive environment and Melvin did not get involved in gangs quickly or easily. He was surrounded at school and in the neighborhoods by young men who were involved with and affiliated with various gangs, but he didn't really get pulled into them as others did. However, he did like to fight and this seems to be what brought him into the gang circles more than anything. Fighting, lots of fighting. And the fights were with fists (it was the 1970s and early '80s). Melvin wasn't even doing anything related to the gangs when he was shot, which is ironic.

Melvin's attitude toward his situation was admirable, he took it in stride and worked hard to get into college and learn to play wheelchair basketball. Obviously, he is strong both physically and emotionally, which propelled him on to the college team and the US team. He played in many world cups and two Olympics.

This book is good for anyone who is interested in how a life goes in two different directions, how one can pick themselves up after a horrific accident, and how a positive approach to life can truly make a difference.