Review: Gang Leader for a Day by Sudhir Venkatesh 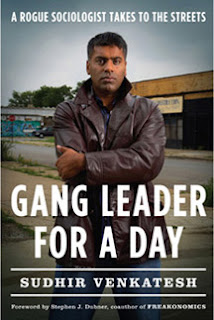 Title: Gang Leader for a Day: a rogue sociologist takes to the streets

Summary (from the inside flap): When Venkatesh first entered an abandoned housing project in Chicago, he was simply looking for people to answer a multiple-choice survey about urban poverty. A first-year graduate student hoping to impress his professors with his boldness, he never imagined that as a result of the assignment he would befriend a gang leader named J.T. and spend the better part of the next decade inside the projects under JT's protection, documenting what he saw there.

Ventatesh got to know the neighborhood dealers, crackheads, squatters, prostitutes, pimps, activists, cops, organizers, and officials. Granted this unprecedented access, he learned how JT and his gang ran their crack-selling business, conducted public relations within their community, and essentially acted as the neighborhood's main political, economic and social force.

Review: I am counting this book for the non-memoir challenge because it really is a sociological study of Chicago city gangs even though it is told in the first person. Venkatesh started out with these crazy multiple choice questionnaires that he planned on asking of Chicago Black Kings gang members (e.g., What is it like to be poor and black?). They held him hostage for 24 hours then he clicked with the leader, JT who invited him to return a week later to hang out.

The author ended up hanging out with JT ands the BKs for six years, getting to know them, their families, their friends, how the gang worked, and more. I found this very interesting. I thought I knew about gangs from working in a high school, but Santa Barbara is no Chicago (obviously). The BKs are serious stuff with a fascinating system where the gang takes "taxes" from the hustlers, prostitutes, tenants, homeless, and squatters while they provide protection. It is a really strange system of all sides making it work since they have to.

His interactions with local law enforcement are quite disturbing (talk about corruption) and the way he finds out why the police and ambulances are never called by tenants in the projects is eye-opening! I highly recommend this book as a way to get a glimpse into the inner-workings of big city gangs and our society at large. The BKs have created a microcosm of the larger society and, whether we think it works or not, at least they all know the rules to follow.