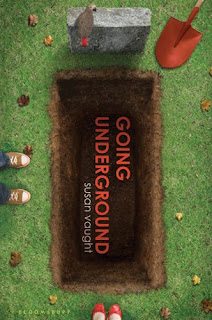 Summary (from the inside flap of the book): When we first meet Del Hartwick, he is digging a grave. Not your typical after school activity, but it's the only job you can get when you have a certain kind of criminal record. What kind of criminal record is that? Del will tell you. When he's ready. It's not that Del did anything wrong, really--at least, not according to his parent, his teachers, or his friends. Or himself. Sort of. But the consequences of one moment three years ago mean that Del is in a whole world of trouble--trouble that will follow him the rest of his life.

Then Del met Livia; beautiful Livia, sad Livia, who comes to Del's graveyard to visit her sister's grave. And suddenly Del has feelings--and hope--that he thought he'd lost forever. Del knows he shouldn't be with Livia until she knows the truth. But how can he tell her the truth when that might mean losing ht done good thing in his life? Let Del explain.

Review: I thought this was going to be about a young man who stole stuff, or ran in a gang (hence the criminal record) and that it would read like many other mediocre YA books. WRONG! There is so much more going on in this book. It is going to be really difficult to write this review without spoilers so I'll give warning when they are coming.

Del does indeed work in a graveyard. His friend Marvin, the only one that stuck around once Del was charged with a felony, hangs out with him and helps him dig. Del's parents are good people and supportive of Del, especially supportive of him telling the truth about what happened. And that may include testifying before the legislature. I like the relationships in this book; they are real, honest, and I believed in them.

The plot is good, too. At first I wasn't really sure what's going on. The book is written as Del's thought process as he digs graves, sees Livia, has to deal with school, and tries to figure out if he should testify. He is also trying to get admitted to college, not an easy task for someone with a felony record. Vaught does a good job of building the suspense about what Del did. He seems like such a nice guy, what could he possibly have done to earn a felony? The story comes out naturally and isn't over-hyped, which is good.


*************Spoiler Alert************
Del's past indiscretions are revealed slowly with every other chapter describing the past. We see him get a girlfriend that he really, really likes. They want to have sex, but don't because they feel they should wait until they are in high school. But they do what many teens are doing these days: sexting. They send each other photographs of themselves naked. And they touch each other. 3 times.

Sexting? Not a bright idea, but with the availability of cell phones and social media I think teens don't think about the consequences of they actions. In the novel adults get ahold of 8 teenagers' cell phones, see the photos and the authorities are called in. Del is charged with 3 counts of rape (he is 14, the girl 13), making child pornography (took his own photo), transporting child pornography (he sent his photo), and possession of child pornography (he kept the photo of his girlfriend). He has to register as a sex offender for the rest of his life.

I don't think students know about this issue, but it seems VERY important!