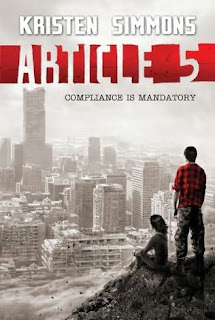 Summary (from the inside flap of the book): New York, Los Angeles, and Washington, DC have been abandoned. The bill of Rights has been revoked and replaced by the Moral Statutes. There are no more police--instead, there are soldiers. There are no more fines for bad behavior--instead, there are arrests, trials, and maybe worse. People who get arrested don't' usually come back.

Seventeen-year-old Ember Miller is old enough to remember that things weren't always this way. Living with her rebellious single mother, it's hard to forget that people weren't always arrested for reading the wrong books or staying out after dark. It's hard to forget that life in the United States used to be different. In the three years since the war ended, Ember has perfected the art of keeping a low profile. She knows ho two get the things she needs, like food stamps and hand-me-down clothes, and how to pass the random home inspections by the military. Her life is as close to peaceful as circumstances allow. That is, until her mother is arrested for noncompliance with Article 5 of the Moral Statutes. And what's worse, one of the arresting officers is non other than Chase Jennings... the only boy Ember has ever loved.

Review: Yet another good dystopian novel for me! Yay! This one was a little different in that there was no arena (Hunger Games trilogy), no choosing of factions (Divergent), no thing in life that was majorly different from how our own society is run. Instead life is more "normal." The standard dystopian issues exist for sure: it's the United States post-war, the military is in charge, and there are strange and strict rules in existance. However, we follow the journey of Chase and Ember as they try to get to safety. The story is built on a journey, rather than battling a specific event or major change in society's structure. That was kind of refreshing.

I liked the characters in this book though I do with Ember was a stronger female. She allows Chase to do most things for her, help her along, make the decisions, and he has to clean up the mess when she does something wrong.

I don't know why, but this dystopian novel struck a thought for me more than others I have read: what we like to read in a dsytopian novel is real life for many people on the planet. They are living in countries where the military rules, where children are forced to kill their parents or teachers (Joseph Kony in northern Uganda, for example). Drug lords rule other countries, people are afraid to go outside after dark, there are curfews, etc. So as I read this book, I thought of how nice it is for me to just read about this society that seems to unbelievable and unreal, while others are actually experiencing these very things. Sorry, a depressing thought.