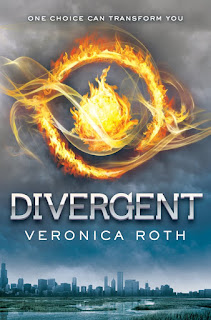 Summary (from the inside flap of the book): In Beatrice Prior's dystopian Chicago, society id divided into five factions, each dedicated to the cultivation of a particular virtue--Candor (the honest), Abnegation (the selfless), Dauntless (the brave), Amity (the peaceful), and Erudite (the intelligent). On an appointed day of every year, all sixteen year olds must select the faction to which they will devote the rest of their lives. For Beatrice, the decision is between staying with her family and being who she really is--she can't have both. So she makes a choice that surprises everyone, including herself.

During the highly competitive initiation that follows, Beatrice renames herself Tris and struggles to determine who her friends really are--and where, exactly, a romance with a sometimes fascinating, sometimes infuriating, boy fits into the life she's chosen. but Tris also has a secret, one she's kept hidden from everyone because she's been warned it can mean death. And as she discovers a growing conflict that threatens to unravel her seemingly perfect society, she also learns that her secret might help her save those she loves... or might destroy her.

Review: I can't believe I am finally reviewing this book! As many of you know, I have waited at least 6 weeks for students to return it. Once I got started on the book I realized that I had no idea what this book was about, just that everyone was enjoying it. Boy am I glad I read this book!

Although it is 487 pages long, I finished this book in two days, that tells you how into I was. It captured me from the beginning with aptitude tests, having to choose family versus one's own future, and the worry that we cannot live up to expectations, that life will be too difficult. Like any good story, Beatrice has friends that help her get through the tough times, but really it is she who has to do the hard work and make it through herself.

I like Beatrice and the other characters, even the ones I hated and that's the mark of a really good book. The evil people were just evil enough without being outrageous, and it was well done that their evilness was partly created by the society in which they lived.

The story is set in the future in a dystopian society, but the issues the characters face (loyalty, honor, conflict, and more) and all present in our lives, which makes this book very accessible and appealing to a broad range of people.

Many of the students that have read this book didn't like the ending and I am not sure why. People we care about die, people we don't like survive, and things are left unresolved. I loved it! Let's be honest, I can't wait until the sequel comes out (it's called Insurgent).

Email ThisBlogThis!Share to TwitterShare to FacebookShare to Pinterest
Labels: 5 Stars, Dystopian Fiction, YA