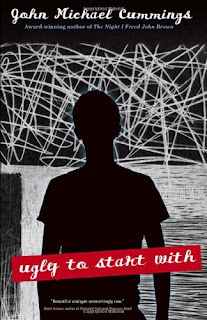 Title: Ugly to Start With

Author: John Michael Cummings
Genre: Adult Short Stories
Pages:144
Rating: 4 out of 5
Challenges:
FTC Disclosure: I received this from the author for review
Summary (from the West Virginia Press website): Jason Stevens is growing up in picturesque Harper's Ferry, West Virginia in the 1970s. Back when the roads were smaller, the cars slower, the people more colorful and Washington, DC is way across the mountings--a winding 65 miles away. Jason dreams of going to art school in the city, but he must first survive his teenage years. He witnesses a street artist from Italy charm his mother, from the back seat of the family car. He stands up to an abusive husband--and then feels sorry for the jerk. He puts up with his father's hard-skulled backwoods ways, his grandfather's showy younger wife, and the fist-throwing schoolmates and eccentric mountain characters that make up Harper's Ferry--all topped off by a basement art project with a girl from the poor side of town.

Review: I was worried at first when I began this book as it didn't seem to work for me, but as I progressed through I liked it better and better; for me the second half was much more interesting and engaging than the first half.

Let me cover the first half since it didn't work quite as well for me. I found the stories a bit interesting, but I felt as if I was missing something. Maybe it was me, but it felt like I didn't "get it" at first. True, I am not poor, not abused, and not a teenage boy, but I don't think that's it as stories should have a universality about them. The story I did enjoy in the first part was Wallet (mentioned in the summary) about an abused wife staying with Jason's family and Jason going after the abused husband. He is so angry, but finds the man's wallet with a letter in it. After reading the letter Jason pities the man. I get those emotions: we feel one way, but other ideas creep up on us as well.

As I've written, the stories in the second half of the book appealed to me much more and I am not sure why. In them I got a better sense of Jason, how he thinks, who he is, and what his life is like. Perhaps it's because he ventured out past his immediate family so I saw what he was like out in the world. Well, in the world that is his town of Harper's Ferry. I particularly liked the second to last story, The Scratchboard Project where Jason visited an African-American classmate who had as tough a life as he has. He managed to be uncomfortable in the setting, but realized that he and his classmate weren't all that different. And, in fact, they could be friends, or more. 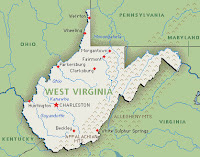 Click to see my updated Google Map. And I've squeaked in another state before the end of the year! West Virginia is definitely relevant to the setting of this story, and in particular, Harper's Ferry, where the stories all take place.