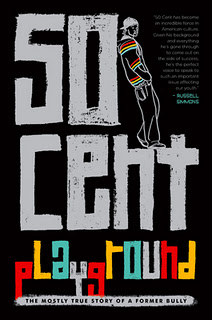 Author: 50 Cent
Genre: YA Fiction
Pages: 314
Rating: 4.5 out of 5
Challenges: PoC
FTC Disclosure: I borrowed this book from my school library
Summary (from the inside flap of the book): Butterball will never tell what caused him to hit that kid on the playground with a sock full of batteries. Thirteen-year-old Butterball doesn't have much going for him. He's teased about his weight. He hates the Long Island suburb his mom moved them to so she could go to nursing school and start her life over. He wishes he still lived with his dad in New YOrk City--where there's always something happening, even if his dad doesn't have much time for him. Still, that's not why he beat up Maurice on the playground. Now his school is forcing him to talk to some out-of-touch lady therapist, as though she could ever fix him--as though she could ever figure out the truth. No, Butterball's lips are sealed about what happened that day. But some tales can't help being told. And this is one of them.

Review: I went book shopping today for my school library and saw this book displayed. I figured 50 Cent wrote it, that might get students to read it. When I got home, I was so intrigued I sat down and read it in one sitting, drawn in from the first page.

Below the description of this book it says that the book is "inspired by 50 Cent's own adolescence and is the hard-hitting and inspirational story of the redemption of a bully." Great description and very true. I like that a rapper and someone who is seen as so hard-core has written a book so full of feeling and insight. He managed to be realistic, honest, and to show the inner thoughts of the bully to allow the reader to see where the behavior and attitude can come from. However, he doesn't excuse Butterball's behavior or try to explain it away as acceptable either.

The story is totally believable, I cared about the main character and what he was going through, who he was interacting with, how he was being treated, and what others are doing that helps him and hurts him. It's so difficult for any of us, teens especially, to accept help, admit defeat or to any wrong-doing, but in the end Butterball manages to do some of this in a very realistic way.

I hope I am successful at recommending this book to my students. 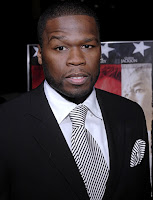 (The author, pictured right. I wanted to show him not as a rapper, but as a person, if that makes sense)
Click to see my updated Google Map. Another New York book, but this one mostly takes place on Long Island so at least that's a little bit of a departure from the other NY books I've read this year.