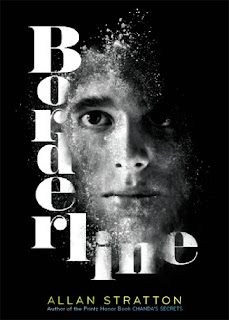 Author: Allan Stratton
Genre: YA Fiction
Pages: 296
Rating: 4.5 out of 5
Challenges: PoC
FTC Disclosure: I borrowed this book from my school library
Summary (from the inside flap of the book): Life's not easy for Sami Sabiri since his dad stuck him at a private school where he's the only Muslim kid. But it's about to get a lot worse. When Sami catches his father in a lie, he gets suspicious.... He's not the only one. In a whirlwind, the FBI descends on his home, and  Sami's family becomes the center of an international terrorist investigation. Now Sami must fight to keep his world from unravelling.

Review: I read this book so quickly; I was drawn in from the very start! Sami is a character that many readers (teens especially) can identify with: he is smart; his parent are strict; he has high expectations for himself; he is bullied because he is different.

The bullying is something that is done ver well in this book, it begins with low-level bullying (nasty comments) and escalates to violence. I got angry as teachers and administrators didn't do anything to stop the bullying or to help Sami. In fact, Sami is the one who got in trouble for responding to the bullies. I also liked the friendships  between Sami and his friends Andy and Marty. They have issues, fights, and don't always get along, but they are there for each other when it matters most.

The other main storyline, the terrorist investigation is also handled well. As the only muslim family in the town (the parents moved to the US from Iran), the Sabiris had to fight to buy their house in their neighborhood, they put up with racial slurs, and they feel that they need to defend themselves to others who question their loyalty to America. When Sami's dad is arrested by the FBI as a terrorist the story seems frighteningly real from his arrest to the media coverage to the outcome (which I won't reveal). We have heard so many similar stories over the past ten years that this book rings true and that's painful.

(The author, pictured right, is a doctor and an author!)
Click to see my updated Google Map. This book is set in upstate New York though the town is never mentioned. They also travel to Canada, specifically Toronto.