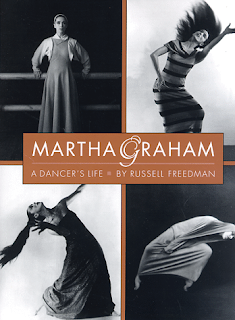 Author: Russell Freedman
Genre: Adult Non-fiction
Pages: 162
Rating: 4 out of 5
Challenges: One Two Theme
FTC Disclosure: I borrowed this book from my school library
Summary (from the inside flap of the book): Martha Graham, the American dancer, teacher, and choreographer, revolutionized the world of dance. An electrifying performer and a major artist of the twentieth century, she possessed a great gift for revealing emotion through the dance she created, expressing beliefs and telling stories in a way utterly new to the world of dance.

Review: What I thought I knew about Martha Graham before I read this book could be summed up in one sentence: She is the founder of Modern Dance and she attended the same high school as me, Santa Barbara High.

Well, obviously, there is so much more to her than that. Here are the things that I found most interesting:

Geography Connection
Martha Graham's life consisted of so many geographical locations: Pennsylvania where she was born, California where she grew up, New York City where she made it as a dancer, Bennington, Vermont where she taught, and more. So, no specific location for this one.