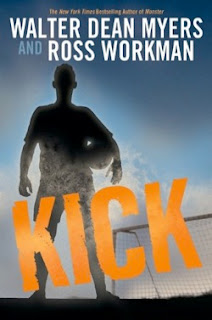 Author:Walter Dean Myers and Ross Workman
Genre: YA Sports Fiction
Pages: 197
Rating: 4 out of 5
Challenges: PoC
FTC Disclosure: I borrowed this book from my school's library (but I read it before I added it to the collection!)
Summary (from the back of the book): Kevin Johnson is thirteen years old. And heading for juvie. He's a good kid, a great friend, and a star striker for his Highland, New Jersey, soccer team. They're competing for the State Cup, and Kevin wants to prove he has more than just star-player potential. Kevin's never been in any serious trouble... until the night he ends up in jail. Enter Sergeant Brown, a cop assigned to be Kevin's mentor. If Kevin and Brown can learn to trust each other, they might be able to turn things around before it's too late.

Review: I have liked every single book of Walter Dean Myers' that I have read. I didn't know much about this one except that I discovered how the book came about when I read the back. Ross W sent an email to Walter Dean Myers saying how Myers is his favorite author because he (Myers) writes as if the characters really are students. Myers' response was, let's write a book together! How cool is that?!

This isn't my favorite of Myers' books, but it has many elements that I enjoy. Soccer is Kevin's, the main character, sport, which I really like. There is just enough of the game for those of us who enjoy it and know it, but not so much that the non-enthusiast will get bored with it.

I had a difficult time believing that the main character was only 13, though I think it's the right age for him to be. I kept picturing him as 15, but that would have made him get in a lot more trouble than a 13 year old. I think the authors did a great job at showing how a teenager's anger stems from various sources and how that anger comes out in different forms. When Kevin finally begins to talk to Jerry Brown (the police officer) he feels better. I think that is so important for teens to realize that all adults aren't out to get them, that some of us are aware of how they feel and why they act the way they do. For teenagers to have an adult that they trust and can go to can make the world of difference.

The ending was a little bit too perfect, but I guess sometimes life does work out, I have to remember that!

(photo credit for the image of the co-author, Ross Workman)

Click to see my updated Google Map. This book takes place in New Jersey, where both of the authors live. I've only been to New Jersey once, about 13 years ago for my brother's wedding, which was in a fabulous town.