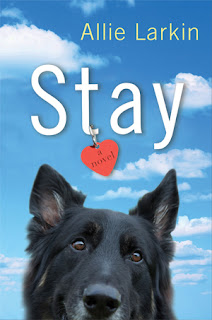 Author: Allie Larkin
Genre: Adult fiction
Pages: 308
Rating: 4.5 out of 5
Challenges: Reading from my Shelves, Awesome Authors
FTC Disclosure: I think I received this book as a gift
Summary (from the inside flap of the book): Savannah "Van" Leone has been in love with Peter Clarke ever since she literally fell head over heels in front of him on the first day of college. Now, six years later, instead of standing across from him at the later, Van is standing behind her best friend Janie as maid of honor, trying to mask her heartache and guilt as Janie marries the only man she's ever loved. Before Van's mother died, she told Van never to let Peter go, but as the couple exchanges vows, Van wonders if her fairy-tale ending will ever come true.

After the wedding, Van drowns her sorrows in Kool-Aid-Vodka cocktails and reruns of Rin Tin Tin, and does what any heartbroken woman in her situation would do: she impulsively buys a German Shepard over the Internet. But the pocket-size puppy Van is expecting turns out to be a clumsy hundred-pound beast who only responds to commands in Slovak. Van is at the end of her rope...until she realizes that this quirky giant maybe the only living being who will always be loyal to her, no matter what.

Van affectionately names her dog Joe, and together they work to mend the pieces of Van's shattered heart. And it certainly doesn't hurt that Joe's vet is a rugged sweetheart with floppy bling hair and a winning smile. But when the newlyweds return from their honeymoon, Van is forced to decide just how much she's willing to sacrifice in order to have everything she's ever wanted--proving that sometimes life needs to get more complicated before it can get better.

Review: I like dogs, but am not a "dog person" so I was a bit worried about this one. Silly me! I loved Joe and all the things he represented for Van (love, loyalty, fun time, spontaneity and more). I first saw this book reviewed by S. Krishna and thought it sounded like fun and I am really glad that I read it!

I managed to read this book in one day (yes, I stayed up late to finish it) because it is fun and an easy read. I liked the story, which is a twist on the standard girl likes boy she can't have, meets another boy, loses and gets him back. I think what struck a chord with me is that the characters and situation are realistic. Their dialogue isn't contrived, the scenes could really happen, and Van's feelings, worries, and actions are believable.

Okay, buying a dog off the Internet seemed a bit far-fetched to me at first but then I realized that I have friends who have done that (granted they weren't drunk at the time). I love Joe. He is exactly what Van needed at the right time: responsibility, unconditional love, and comfort. The author had me hooked when Joe lay next to Van and let out a big sigh. My dog does that too!

And the men in Van's life. I think we've all had a "Peter," the person we like forever but nothing ever comes of it. Alex, Joe's vet, is a great guy who has baggage, but nothing that cannot be overcome with time. I loved his relationship with Louis, the 80-year old father figure. The way they welcomed Van into their lives, fed her, cared about her, and brought her in was fantastic.

Overall I highly recommend this book. It's funny, sad, poignant, and great entertainment. It made me want to go out and get a Border Collie, train it well, and have it forever. Then I remembered my poodle and how much work having a dog is. I think I'll stick to what I've got! 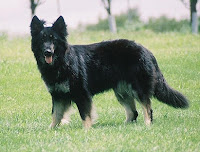 Click to see my updated Google Map. Yet another book set in New York state, but this one was north, in Rochester so that was a nice change. The setting didn't matter so much even though they talked a lot about the fact that Van was from near the city so being in Rochester must be difficult since she was far from family.