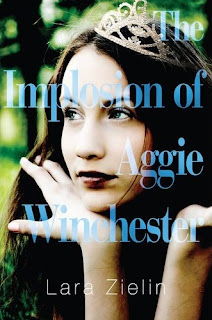 Title: The Implosion of Aggie Winchester

Author: Lara Zielin
Genre: YA fiction
Pages: 278
Rating: 4.5 out of 5
Challenges:
FTC Disclosure: I received this book from the publisher for review
Summary (from the book's website): Sixteen year old Aggie Winchester is that rare mix of Goth girl and principal's kid--a rebel, or so she'd like to thing. It's the spring of her junior year and all anyone can talk about is the prom and, most important, who will be this year's prom king and queen. But Aggie couldn't care less about who's election prom queen--even it it's her pregnant Goth best friend, Sylvia Ness. Aggie's got bigger things to worry about, like whether or not her ex-boyfriend wants to get back together and whether her mom will survive cancer.

Review: I read Lara Zielin's first novel, Donut Days and quite liked it, but this one is better. The story is more mature and better formed and the writing has improved. So, yay!

The main character Aggie is like so many students in high school: she wants to fit in. But, that's not always easy, especially when your mom is the principal. So, armed with a new friend freshman year Aggie went goth. She figured if she was getting teased she might as well create a tough exterior to help her have a tough interior. While it worked for a while, or at least that's what she told herself, by junior year the toughness is wearing thin. I think this part of the story, Aggie's inner turmoil (implosion), was really well done. While others around her see the changes in her it takes a while for her to realize that her parents aren't all that bad, that her best friend isn't healthy for her, and that she can be who she wants to be and still be okay. What a huge lesson.

There is a bit of romance in this book, but it definitely takes a back seat to the prom spectacle going on at St. Davis High School. There's queen campaigning, ballot stuffing, teachers and administrators not handling the situation well, and the local newspaper spreading it all over town. As a reader I wanted to stop the spiraling disaster that was the prom debacle, but of course I couldn't and it had to ride itself out, dragging various characters down with it. But, with many social disasters in high school there is an upside in the end, which was good and real. True friendships came out of it as well as an understanding between Aggie and her parents, neither of which felt fake.

To top it off the issues of honesty, disabilities, trust, friendship, family, peer pressure, and more are all covered in this fun book.

Click to see my updated Google Map. My first Minnesota book and it involves lakes, how appropriate! The story actually takes place in a town outside St. Paul, a city I've actually been to. Two of my good friends in college grew up in St. Paul so I visited them just before senior year in college, which was really fun.