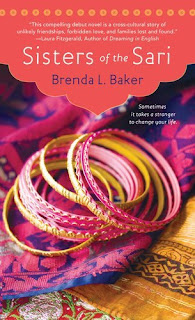 Title: Sisters of the Sari

Author: Brenda L. Baker
Genre: Adult Fiction
Pages: 330
Rating: 4 out of 5
Challenges: PoC
FTC Disclosure: I received this book from the publisher
Summary (from the back of the book): Kiria is a high-powered American executive, Santoshi is a former slave living in Chennai, India. These two unlikely friends are about to dramatically change each other's lives--along with the lives of those around them. While vacationing in India, Kiria Langdon, the opinionated and driven CEO of a major company, meets Santoshi, a former slave who works as a cleaning lady and lives in a shelter for homeless women in Chennai. Appalled by the conditions in the shelter, Kiria becomes obsessed with the idea of building decent housing for poor working women in India. Santoshi reluctantly agrees to help, even though she thingks Kiria's ideas are too crazy to succeed.

With Kiria's money and business sense and Santoshi's street smarts, the New Beginnings Women's Hostel slowly takes shape. As Kiria stumbles her way through INdian culture, Santoshi helps her appreciate its strength and beauty. Santoshi, who never realized the limitations of her life, finds herself drawn to the excitement of the world that Kiria shows her outside the shelter.

Review: When I received this book from the publisher I was excited to read it, but then I began my Shantaram read-a-long and I put this book aside. I didn't want to read two books set in India at the same time; I felt like I would get them mixed up. Then guilt set in and I realized that I needed to get to this review. I needn't have worried. This book is so utterly different from Shantaram and I read it so quickly that there was no confusion at all!

While this book is officially about Kiria setting up a hostel for women and about Shantoshi helping her, it's really about friendship. Friendship that transcends age and culture and class. I think Baker did a wonderful job of showing who Kiria and Shantoshi are on the outside, especially to one another, and slowly revealing their strengths and weaknesses while they get to know each other better. Through time together and a common goal the two women learn from each other how to be better people and how to make a difference.

The cast of characters that these two women surround themselves with, some on purpose and some by accident are also key to the story. I really enjoyed the way characters from various walks of life--street prostitutes, nasty family members, gay and straight, rich and poor--are incorporated into the building of the women's hostel. Each character brings out experiences and personality traits that serve to move the story forward and allow the reader to really understand Kiria and Shantoshi.

The Indian culture is also a strong presence in this book, which I really like. The author lived in India for a time and that is evident in her descriptions of the noises, smells, saris, gestures, and attitudes that make India the fantastic country of contrasts that it is. 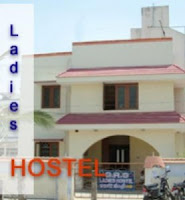 (photo credit for photo on right)

Click to see my updated Google Map. Another book set in India, apparently I just can't get enough of them! This one is set in Chennai, in the south, which is a new location for me. Here are some of my recent reads that are set in India: