Review: Inside Out (Maria V. Snyder) 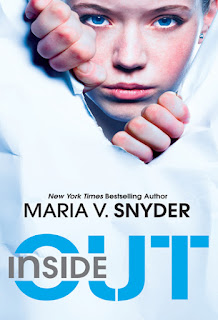 Author: Maria V. Snyder
Genre: YA Dystopian fiction
Pages: 315
Rating: 4.5 out of 5
Challenges:
FTC Disclosure: I borrowed this from my school's library
Summary (from the back of the book): I'm Trella. I'm a scrub. A nobody. One of thousands who work the lower levels, keeping inside clean for the Uppers. I've got one friend, do my job and try to avoid the Pop Cops. so what if I occasionally use the pipes to sneak around the Upper levels? The only neck at risk is my own... until I accidentally start a rebellion and become the go-to girl to lead a revolution.

Review: The summary description on the back of the book is too simplistic for this dystopian novel. It makes it sound like a generic dystopian novel, but this is more than that. I've only begun to read YA dystopian in the last year and there does tend to be a formula of the main character leading a charge against the government.

But this novel is different from that. Yes, Trella becomes the leader of the revolution by accident, but she has the help of a lot of characters along the way, including those that seem to be in the ruling class. I liked that twist and am not going to expand on it in case you haven't read the book yet.

I liked Trella, but I don't really feel like we get to know her and the other characters all that well. We see their actions, but that's all there is. Normally I wouldn't like that, but in the world of scrubs and Uppers, that seems appropriate somehow. Characters' actions are important and speak loudly. I was continually reminded that even the smallest action of rebellion or help makes a difference.

I was definitely reminded of World War II and the Holocaust when reading this book (and yes, Star Wars since that's connected to WWII) in that one group in society has been convinced of another group's lacking and lower status. The lowest group is herded into small spaces, separated out from the rest of society, works the lesser jobs, has access to bad food, long work hours, and harsh punishment.

What an ending, it doesn't even pretend that it's not setting the reader up to read the sequel. Good thing we've got it in my school library!

If you want to try dystopian fiction or want to read one that is a bit different from the usual fare, then give this one a try!

*Spoiler* Geography Connection: There really is no geography connection on this one since the whole thing takes place in a huge building hurtling through space.