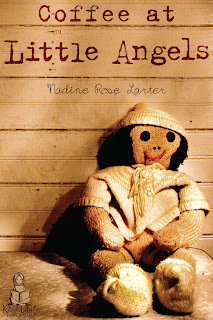 Author: Nadine Rose Larter
Genre: Adult fiction
Pages: 188
Rating: 4 out of 5
Challenges:
FTC Disclosure: I received a free pdf of the book from the author
Summary (from Amazon): Philip, Sarah, Kaitlyn, Caleb, Maxine, Grant, Melanie and Josh grew up in a small town where they spent their high school years together as an inseparable clique. But high school has ended, and they are all living their own "grown up" lives, each under the impression that their group has basically come to an end. When Philip dies in a hit and run accident, Kaitlyn summons the others to all come back home, forcing a reunion that no one is particularly interesting in partaking in. Coffee at Little Angels follows how each character deals with the death of a childhood friend while at the same time dealing with their own ignored demons after years of separation. Events unfold as the group tries to rekindle the friendship they once shared to honor the memory of a friend they will never see again.

Review: This book came to me at an interesting time. A colleague was found dead just a few days ago, his life cut short much too early. It doesn't seem right that he won't be there when school begins again in a few weeks and that the football team will have a new coach at the helm. I thought a lot about Jeff while I read this book and about my high school friends who are no longer alive. The author says that she wrote this book after a high school friend of hers died and that she misses him as "someone she hasn't seen in a while" rather than as someone who is no longer alive. I totally get that feeling. I often forget that friends and loved ones are dead if they are someone I didn't see on a regular basis and I wonder what they are doing or feeling and then I remember.

The characters in this book are dealing with many of these same issues. They were (mostly) a close knit group in high school, but it's been ten years and they have drifted apart. They have come home to mourn their friend, but bring secrets, desires, memories and guilt as they come together in a forced situation that none of them really wants to deal with. Their thoughts and attitudes are real, believable and painful all at the same time.

I really enjoyed the relationships of the various combinations of friends, it was realistic and really is what large groups of friends are like. It was also good that by the end they were able to open up to one another, admit some of their failings and deeds and move on with a shared past that doesn't necessarily mean that they will have a shared future.

I am not sure why the book is called Coffee at Little Angels. Little Angels is a coffee shop owned by one of the characters and they do all spend some time there, but it really isn't the focus of the book. I don't know what a better title would be, but I was thrown a bit by it. 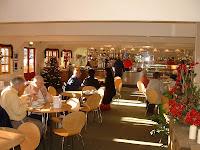 (photo credit for the coffee shop photo on the right

Click to see my updated Google Map. This is my first fiction book this year set in South Africa. However, you wouldn't really know it's South Africa unless you knew the author was from there until way into the book when they mention Cape Town in one sentence. Actually, the characters' attitudes about blacks is also a give away since they talk about how scandalous it is that one of their friends married a black woman and wouldn't it be difficult if they had children.

Email ThisBlogThis!Share to TwitterShare to FacebookShare to Pinterest
Labels: 4 Stars