It's My Birthday (and I'm doing a big give away)!

Well, today is my Birthday and I don't really have any big plans (that's what happens when you turn 46... just another mid-40s kind of day). No wait, that's not entirely true. I don't have major plans for today, but I am going to a concert in the park tomorrow evening and to see the musical Hairspray at an open air theater Friday night, so all is not lost. 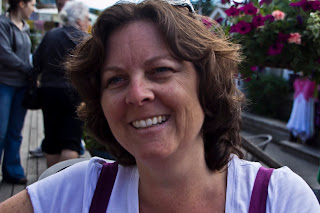 To celebrate my Birthday I've decided to do a give away of books I just am not finding myself getting to. They all sound good, but I am trying to de-clutter my life a bit. So, check out the books below and fill in the form to let me know which ones you'd like.

This give away is international and open until August 1, 2011.

Girl in Hyacinth Blue by Susan Vreeland (paperback)--A professor invites a colleague from the art department to his home to see a painting that he has kept secret for decades. The professor swears it is a Vermeer--why has he hidden this important work for so long? The reasons unfold in a series of stories that trace ownership of the painting back to World War II and Amsterdam, and still further back to the moment of the work's inspiration. As the painting moves through each owner's hands, what was long hidden quietly surfaces, illuminating poignant moments in human lives.

A Cup of Friendship by Deborah Rodriguez (hardback)--After hard luck and some bad choices, Sunny has finally found a place to call home--it just happens to be in the middle of a war zone. The thirty-eight-year-old American's pride and joy is the Coffee Shop, where she brings hospitality to the expatriates, misfits, missionaries, and mercenaries who stroll through its doors. She's especially grateful that the busy days allow her to forget Tommy, the love of her life, who left her in pursuit of money and adventure.

Consequences by Penelope Lively (paperback)--London 1935. A chance meeting in St. James' Park sparks a love affair that reverberates through three generations of women and the major events of the twentieth century--from the devastation of World War II to the social revolution of the 1960s to a journey of self-discovery at the end of an era.

Mennonite in a Little Black Dress by Rhoda Janzen (paperback, memoir)--Not long after Rhoda Janzen turned forty, her world turned upside down. It was bad enough that her husband of fifteen years left her for Bob, a guy he met on Gay.com, but that same week a car accident left her seriously injured. Needing a place to rest and pick up the pieces of her life, Rhoda packed her bags, crossed the country, and returned to her quirky Mennonite family's home, where she was welcomed back with open arms and offbeat advice. (Rhoda's good-natured mother suggested she get over her heartbreak b dating her first cousin--he owned a tractor, see.)

The Friday Nigh Knitting Club by Kate Jacobs (paperback)--Once a week, an eclectic group of women comes together at a New York City yarn shop to work on their latest projects--and share the stories of their lives.... At the center of Walker and Daughter is the shop's owner, Georgia, who is overwhelmed with juggling the store and single-handedly raising her teenage daughter. Happy to escape the demands of her life, she looks forward to her Friday Night Knitting Club, where she and her friends--Anita, Peri, Darwin, Lucie, and KC--exchange knitting tips, jokes, and their deepest secrets. But when the man who once broke Georgia's heart suddenly shows up, demanding a role in their daughter's life, her world is shattered.

The Knitting Circle by Ann Hood (paperback)--After the loss of her only child, Mary Baxter finds herself unable to read or write, the activities that used to be her primary source of comfort. She reluctantly joins a knitting circle as a way to fill her lonely days--not knowing it will change her life. As they teach Mary new knitting techniques, the women in the circle also reveal their own secrets of loss, love, and hope. With time, Mary is finally able to tell her own story of grief, and in so doing finds the spark of life again.

Summer at Tiffany by Marjorie Hart (paperback, memoir)--New York City, 1945. Marjorie Jacobson and her best friend, Marty Garrett, arrive fresh fro the Kappa house at the University of Iowa hoping to find summer positions as shopgirls. Turned away from the top department stores, they miraculously find jobs as pages at Tiffany & Co., becoming the first women to ever work on the sales floor, a diamond-filled day job replete with Tiffany-blue shirtwaist dresses from Bonwit Teller's--and the envy of all their friends. Looking back on that magical time in her life, Marjorie takes us back to when she and Marty rubbed elbows with the rich and famous, pinched pennies to eat at the Automat, experienced nightlife at La Martinique, and danced away their weekends with dashing midshipmen. Between being dazzled by Judy Garland's honeymoon visit to Tiffany, celebrating VJ Day in Times Square, and mingling with Cafe society, she fell in love, learned unforgettable lessons, made important decisions that would change her future, and created the remarkable memories she now shares with all of us.

Engleby by Sebastian Faulks (paperback)--Meet Mike Engleby, al second-year student at university. Despite the fact that Mike is obviously intelligent, and involved in many clubs, it is clear that something about Mike is not quite right. When he becomes fixated on a classmate named Jennifer Arkland, and she goes missing, we are left with the looming question: is Mike Engleby involved?

Day After Night by Anita Diamant (hardcover)--Day After Night is based on the extraordinary true story of the October 1945 rescue of more than two hundred prisoners from the Atlit internment camp, a prison for "illegal" immigrants run by the British military near the Mediterranean coast north of Haifa. The story is told through the eyes of four young women at the camp with profoundly different stories. All of them survived the Holocaust: Shayndel, a Polish Zionist; Leonie, a Parisian beauty; Tedi, a hidden Dutch Jew; and Zorah, a concentration camp survivor. Haunted by unspeakable memories and losses, afraid to begin to hope, Shayndel, Leonie, Tedi, and Zorah find salvation in the bonds of friendship and shared experience even as they confront the challenge of re-creating themselves in a strange new country.

When Everything Changed: The Amazing Journey of American Women from 1960 to the Present by Gail Collins (hardback, non-fiction)--When Everything Changed begins in 1960, when most American women had to get their husbands' permission to apply for a credit card. It ends in 2008 with Hillary Clinton's historic presidential campaign. This was a time of cataclysmic change, when, after four hundred years, expectations about the lives of American women were smashed in just a generation. A comprehensive mix of oral history and Gail Collins' keen research--covering politics, fashion, popular culture, economics, sex, families, and work--this is the definitive book on five crucial decades of progress.

32 Candles by Ernessa T. Carter (paperback, I've read this one and it was good)--Davie Jones--an ugly duckling growing up in small-town Mississippi with a mother who couldn't get any meaner--is positive her life couldn't be any worse. Just when she's resigned herself to her fate, she sees a movie that will change her life--Sixteen Candles. But in her case, life doesn't imitate art. Tormented in school and hopelessly in unrequited love with a handsome football player, Davie finds it bittersweet to dream of Molly Ringwald endings. When a cruel school prank goes too far, Davie leaves the life she knows and reinvents herself in the glittery world of Hollywood--as a beautiful and successful lounge singer. Just as she's about to ride off into the LA sunset, the past comes back withe a vengeance, threatening to crush Davie's dreams--and break her heart again.