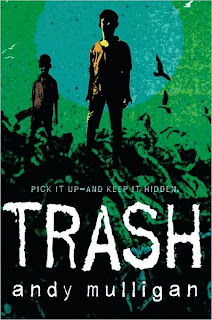 Title: Trash
Author: Andy Mulligan
Genre: YA mystery
Pages: 232
Rating: 4 out of 5
Challenges: PoC, Suspense and Mystery
FTC Disclosure: I borrowed this book from my school library
Summary (from the back of the book): In an unnamed Third World country, in the not-so-distant future, three "dumpsite boys" make a living picking through the mountains of garbage on the outskirts of a large city. One unlucky-lucky day, Raphael finds something very special and very mysterious. So mysterious that he decides to keep it, even when the city police offer a handsome reward for its return. That decision brings with it terrifying consequences, and soon the dumpsite boys must use all of their cunning and courage to stay ahead of their pursuers. It's up to Raphael, Gardo, and Rat--boys who have no education, no parents, no homes, and no money--to solve the mystery and right a terrible wrong.

The summary says it is set in an unnamed Third World country and I assumed South America because the documentaries that I've seen about children/families who live on trash heaps were from Brazil. I must admit part of my interest in this book was that it was set in South America since I hardly ever read books with that setting. However, the author spent time in Manila, Philippines where he visited the trash heap children. So, I am going to assume it's the Philippines.

The trash heaps are amazing: neighborhoods, Mission schools, "houses", etc. What a crazy life. It made me realize how resilient people are; whatever the situation, we create family and a community. The three teenagers in this book have done just that; they look out for one another, work and live together, and help each other out when the mystery begins.

I really liked the mystery portion of this book. It was intriguing, well though out, not impossible to imagine, included a little political commentary, and didn't wrap up too quickly. I could have thought that teenagers wouldn't have taken the risks these boys did, but in reality, they would have. They don't have a lot to lose and, officially, teens don't have the sense of consequences that adults have. While I would have been too scared to do, to them it was part adventure, part getting back at the rich bad guy.

(photo credit for right photo)
Click to see my updated Google Map. I saw a really interesting documentary about children and families who live in the landfills of Brazil, how they search for glass and plastics all day and then make their money by turning it in for recycling. It broke my heart to see barefoot children walking and living amongst trash, needles, etc. I had no idea there were neighborhoods and schools associated with the landfills until I read this book!

Email ThisBlogThis!Share to TwitterShare to FacebookShare to Pinterest
Labels: 4 Stars, Mystery, POC, YA