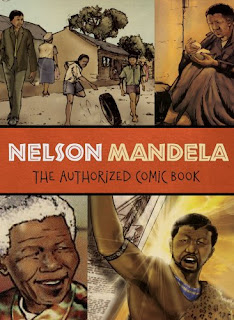 Title: Nelson Mandela: the authorized comic book
Author: Nelson Mandela Foundation with Umlando Wezithombe
Genre: Graphic Novel, non-fiction
Pages: 193
Rating: 4.5 out of 5
Challenges: PoC, Reading from my Shelves
FTC Disclosure: I bought this book with my own money
Summary (from the back of the book): Freedom fighter, fugitive, President of his nation, hero of the world, Nelson Mandela was called a terrorist, forced into hiding, captured, threatened with death, and eventually thrown into jail. But nothing could stop him from fighting to liberate his country from Apartheid. All of this and much more is presented in vivid color by a team of South African artists.

Nelson Mandela's memoir, Long Walk to Freedom, electrified the world in 1994 with the story of a solitary man who, despite unbelievable hardships, brought down one of the most despised regimes in the world. Now comes this fully authorized graphic biography, which relays in pictures from the life story of the world's greatest moral and political hero--from his boyhood in a small South African village to his growing political activism with the ANC; his twenty-seven year incarceration, eighteen of them as prisoner 466/64 on Robben Island; his dramatic release; and his triumphant years as president of South Africa. With new interviews, firsthand accounts, and archival material that has only recently been uncovered, this visually dramatic biography promises to introduce Mandela's gripping story to a whole new generation of readers.


Review: What can I say about this book? Nelson Mandela is one of my heroes and this book does his story justice. It begins with his birth and continues until his retirement and work  in his 80s. Personally, I enjoy the later parts of his story, particularly once he is president of South Africa. His work on reconciliation and human rights is unparalleled.

The graphics are wonderful; they are strong, bold, and very realistic. They really do add to the story, especially if the reader doesn't know the players. South African history and Apartheid were some of my favorite topics to cover when I was a history teacher since it ranges from frustration, hatred and sorrow to inspiration, results, and hope. This book does a really good job of conveying those feelings and the power of a grassroots movement to make a difference.

While the general gist of Mandela's story is not new, the details can easily fill in blank spots in even the most educated reader's knowledge. For anyone who is interested in learning history, reading the story of a great man, or just reading a good story, this is the book.
Geography Connection: 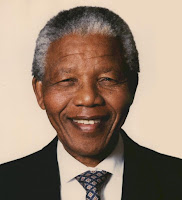 (photo credit for right photo of the author)
Click to see my updated Google Map. South Africa is the setting for this book. I've seen a ton of documentaries and Hollywood movies set in South Africa, but I don't think I've ever read a book set there. Oh yes I have: The Power of One and The Dog Barks at Midnight, both of which I thought were good. Movies I recommend: Cry Freedom (Denzel Washington as Steve Biko and Kevin Kline as Donald Wood) and Invictus (Morgan Freeman is AMAZING as Nelson Mandela and Matt Damon)

I'm hoping to read one of his memoirs at some point. Meanwhile, it will be nice to check this one out. Mandela and Gandhi are two figures I respect a lot!

Aths--Oh yes, definitely add Gandhi to the list of heroes!