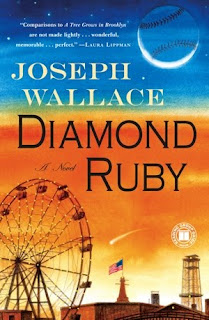 Title: Diamond Ruby
Author: Joseph Wallace
Genre: Adult fiction (sports)
Pages: 480
Rating: 4.5 out of 5
Challenges: What's in a name (gem)
FTC Disclosure: I bought this book on my iPad
Summary (from the author's website): New York City in the 1920s was like a vast ocean swirling with treacherous currents: It was easier to drown than to stay afloat. But young Ruby Thomas, newly responsible for her two nieces after a devastating tragedy, is determined to keep her family safe. She's got street smarts, boundless determination, and one great skill: the ability to throw a ball as hard as the greatest pitchers in baseball-mad city.

Diamond Ruby chronicles the life and times of a girl who rises from utter poverty to the kind of renown only the Roaring Twenties can bring. But fame comes with a price, and Ruby must protect her family from Prohibition rum-runners, the Ku Klux Klan, and the gangster underworld.


Review: So much fun, that's what this book is! Going in all I knew was that this book would count for the What's in a Name Challenge and there was a girl who played baseball. Talk about not knowing what I was in for because this book is so much more than that!


All in all a very enjoyable book with a great set of characters, balance, and an inspiring story.
Geography Connection: 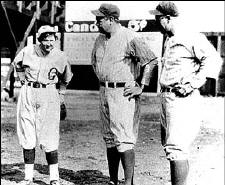 (photo credit for right photo)
Click to see my updated Google Map. The photo on the right is of Jackie Mitchell, the real "Diamond Ruby" with Babe Ruth and Lou Gherig! Of all my New York books that I've read this year, this book has done the best at really showing the reader what New York is like as a city and I liked that. Obviously, I wasn't alive in the 1920s, but from what I've read and seen in films, this book really captured the times and the geography of its place.

A girl who plays baseball - now that would make for a great reading! This looks like a great read!

I love it when real stories are built into fiction. That bit about the lady who struck out Babe Ruth was great! I'm glad the book was fun to read.

Aths--I am all about the sports fiction, it seems. I would never say that's a genre I am drawn to, but when I read it I really enjoy it!

Alyce--I also love real life built into fiction, especially when I don't know about it until I've finished the book

This is my GEM pick too! Can't wait to start!!

I heard this was wonderful and you just confirmed that. Nice review.

Helen, guess where Jackie Mitchell was when she struck out TWO baseball greats? In my town, Chattanooga!

The information below is from http://northpaw.mlblogs.com/tag/chattanooga/

When Jackie was sixteen years old, she played for a women’s team in Chattanooga, Tennessee. When she was seventeen, she attended a special baseball school in Atlanta, Georgia. As a result, Jackie attracted the attention of Joe Engel, the president and owner of the Chattanooga Lookouts. He offered her a contract to play for the entire 1931 season.

On March 28, 1931, Jackie signed the contract. At that moment, she became an official member of the Chattanooga Lookouts, a Class AA minor league team.

Meanwhile, the New York Yankees had finished spring training in Florida and were on their way to New York. As in previous years, they would stop in Chattanooga to play the Lookouts.

The game was scheduled for April 1. Unfortunately, it rained, and the game was cancelled. By Thursday, April 2, the rains had stopped. At 2:30 that afternoon, the game began but Jackie was not the starting pitcher.

Instead, she watched. Earle Combs, the Yankees’ lead-off batter, clobbered a double. Lyn Lary was up next. He slapped a single up the middle, scoring Combs from second. Next to bat was Babe Ruth.

At that moment, Manager Niehoff headed to the mound. He pulled the starting pitcher and waved Jackie to the mound.

Jackie’s first pitch to the Babe sailed high for a ball. But her next three pitches were strikes. In fact, her final pitch dropped across the plate for a called third strike.

The crowd of 4,000 went wild. But Jackie’s work was not over. The next batter was Lou Gehrig, the Yankees’ clean-up hitter. On three pitches, she struck him out, too.

Diane--I hope you get a chance to read it

Bonnie--I thought of you when I saw that the real events took place in Chattanooga! it's such a great story (in real life and in fiction)

Thanks for the review. I think this will be an intersting read.

BookQuoter--It's definitely a good one, I keep thinking about it

I really enjoy reading about sports so this one sounds like a great choice! I'm adding it to my list :) Thanks for the review.

Bailey--If you enjoy sports fiction you'll definitely like this one

I'm glad you enjoyed Diamond Ruby. I did too.

Pussreboots--This is definitely a book that I keep thinking about