Review: Where She Went (Gayle Forman) 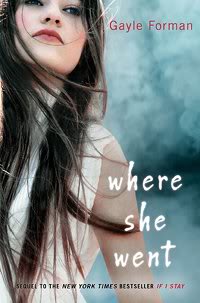 Title: Where She Went
Author: Gayle Forman
Genre: YA fiction
Pages: 258
Rating: 4 out of 5
Challenges:
FTC Disclosure: I won this book and am putting it in my school's collection
Summary (from the inside flap of the book): It's been three years since Adam's love saved Mia after the accident that annihilated life as she knew it... and three years since Mia walked out of Adam's life forever.

Now living on opposite coasts, Mia is Juilliard's rising star and Adam is LA tabloid fodder, thanks to his new rock star status adn celebrity girlfriend. When Adam gets stuck in New York by himself, chance brings the couple together again, for one last night. As they explore the city that has become Mia's home, Adam and Mia revisit the past and open their hearts to the future--and each other.


Review: This is the sequel to Gayle Forman's If I Stay, which I really liked. I have read mixed reviews about this book and I wonder if that's why I found the beginning a bit difficult and slow. But, once Mia and Adam meet up again, I was hooked!

It felt comfortable to read about characters I already knew and liked, like catching up with old friends. I was a bit confused at the beginning because there is so much reference to the fact that Adam and Mia hadn't spoken for three years and I couldn't figure out why. By the end the reader finally learns why and I understand the reason for holding out on us, but only now that I am finished with the book.

At first I thought it was just too much that Adam is a famous musician and rock star and that Mia is also an almost famous cellist with concerts around the world. I mean, really, what are the chances? However, I then realized that YA books don't have to be about "normal" people all the time. There are famous people who come from regular roots. In fact, most of them do. So why not these characters that I liked so much from the first book?

And the story really worked for the romantic in me. I liked that they were awkward and unsure when they first met up; they talked about dumb stuff so they could avoid the difficult stuff. They tested one another along the way, only revealing bits of themselves at a time.

(photo credit for right photo)
Click to see my updated Google Map. Another New York book! But I liked that this one took us on a tour of interesting spots as Mia led Adam around the city to her favorite places. I had an apartment mate that was a wonderful cellist so for me the cello stuff was also fun to read about.

Email ThisBlogThis!Share to TwitterShare to FacebookShare to Pinterest
Labels: 4 Stars, Romance, YA

Aths--I definitely liked the first book better, but I liked this one better than many other reviewers did.

I'm glad you like this better than I did :) I don't hate it, but it was just okay for me. Definitely like the first one much better. Now I just have to go write the review!

I have extreme doubts that I will like this one as much as If I Stay, but I want to read it anyway!

Lola--If you have doubts, don't waste your time, you'll probably just get frustrated

I had the same reaction... I thought all the info about Adam in the beginning was a bit much but once they connected again it was interesting to hear the story.

Sheila--So glad I'm not the only one who thought the beginning wasn't great. I think she's better at their relationship stuff, which I liked.