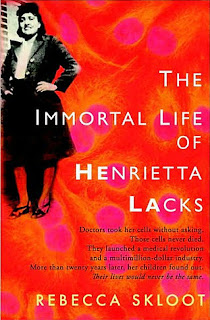 Title: The Immortal Life of Henrietta Lacks
Author: Rebecca Skloot
Genre: Adult Non-fiction
Pages: 384
Rating: 4.5 out of 5
Challenges: PoC; Shelves (does it count if it's been on my Kindle forever?); Awesome Authors
FTC Disclosure: I bought this e-book
Summary (from the author's web site): Her name was Henrietta Lacks, but scientists know her as HeLa. She was a poor black tobacco farmer whose cells--taken without her knowledge in 1951--became one of the most important tools in medicine, vital for developing the polio vaccine, cloning, gene mapping, in vitro fertilization, and more. Henrietta's cells have been bought and sold by the billions, yet she remains virtually unknown, and her family can't afford health insurance.


Review: I have had this book on my Kindle for SO long, but waited to read it until the end of March because our local University of California campus is reading it for their community read and I wanted to read along with them. In addition, on April 11 the author, Rebecca Skloot, is giving a talk about the book at UCSB and I wanted the book to be fresh in my mind when I go hear her speak.

I'll admit that at the beginning I liked the book, but didn't love it. Maybe it's because there are so many "characters" to keep track of or maybe it's the complicated science, but it just didn't grab me instantly. However, I knew that I wasn't as overwhelmed as Henrietta's Lacks' family with the science; they are a family with only a little education (like 4th grade some of them), little money, and no real knowledge of the larger world of science. I cannot imagine what was going through their minds when they found out about their mother's cells!

Skloot did a wonderful job of showing the grief, anxiety, and distrust felt by the Lacks family over the decades since they found out about the HeLa cells. They didn't even know their mother's cells had been taken until 25 years after her death! When they did learn about it, they thought part of their mother was still alive and that people were experimenting on her, causing her pain. For decades they didn't understand what it meant that Henrietta's cells were being reproduced. It turns out journalists and doctors had contacted the Lacks children over the years to get the family's story, but the children (now adults) didn't trust any of them. Some of the children felt they had been cheated out of money that was being made of Henrietta's cells.

Approximately half way through the book I was hooked. The chapters alternate between the history of the Lacks family and work being done on the cells with the current-day story of Rebecca Skloot talking to Henrietta's now-adult children. Once Deborah, Henrietta's daughter, entered the story I was fully committed. Through Deborah we really get a feel for the family, their torment, their understanding of the cells and the research, and we get to know the personal side of the science. When Deborah sees her mother's cells for the first time I actually got teary! By joining the author on research trips, Deborah began to understand more and more about the science behind the cells, the reason so many people wanted access to the cells, and the impact the cells had on modern-day medicine.

I am astonished at the medical and scientific work that has come out of working with these HeLa cells! Henrietta's cells have flown in space, been blown up with nuclear weapons, been radiated and they have played a role in the creation of the vaccines for polio, Hepatitis B, cervical cancer (HPV), medications for AIDS, and much more. Who else can say that they have had such a large impact on saving people's lives?!

Click to see my updated Google Map. How cool that I was vacationing in Virginia when I read this book that is based in Virginia (and Baltimore)! As we drove through rural areas, I got a better sense of what life could have looked like for Henrietta and her family.

I saw the author speak about this book on TV, maybe Good Morning America, and thought it sounded very intriguing.

My book club considered this book for a monthly choice but decided against it because one of our members' husband has cancer right now and she thought it might evoke bad feelings of dread or something. Is that the case? Would a person who is dealing with cancer be alarmed by this book or would it make them feel more anxious, in anyway about cancer and cancer treatment?

I got teary too when they saw their mum's cells for the first time. The most touching scene for me came right after - what the brother said/did to the author. I am glad the book won you over in the end! It was one of my top 3 reads last year. So lucky that you get to hear her speak!

Beth--Intriguing is a good word for this book. I hope I can make it to her talk next week.

Anne--Good question. There is some description of her treatment (ala 1951) which isn't pleasant. But, treatment today is so different. I think it would be okay and that person could skip those parts. 95% of the book is about Henrietta's family and the life of the cells

Christa--I agree, the brother's comment after they see the cells created more tears. Thank goodness they found one doctor who cared!

I loved this book! What a legacy Henrietta has left for her family and for our world.
I would love to hear your thoughts after hearing the author speak. I saw her on Charlie Rose, I believe, and knew I had to read it.

I found this story shocking and yet fascinating. Glad you gave it high marks as well.

Kathy--I somehow missed the author on TV; it sounds like she does a good job of public speaking about the book

Diane--There was a lot that was shocking: lack of education; poverty; the treatment of blacks in general; the disregard for Henrietta's family. But oh so well told

I can imagine the family's distrust after they heard something like this. This book sounds just as awesome as everyone keeps telling. I think I will still wait a while before reading.

Aths--Distrust was a HUGE part of this story. I didn't mention that there were multiple urban legends that white doctors kidnapped blacks to use for experiments, which just added to the family's worries

I think I had the same experience as you - I didn't love it at the beginning, in part because there were just way too many characters to keep track of. But by the end, I was totally enthralled and had a really hard time putting it down!

Carina--So glad there is someone else who didn't love it right from the beginning, but SO worth it by the end!

This book is a choice for our town's program: Naperville Reads. The author is coming April 20 for a book talk and a book signing, but I have to say that while the premise sounds interesting, I don't think it's a book I'd love.

Bellezza--How funny that both our towns have chosen the same book for the community reads projects.

I was afraid the scientific mumbo jumbo would render this book too complex. I wanted to read this so much. Perhaps when I finished all of my 15 library book loan and I'll get to it!