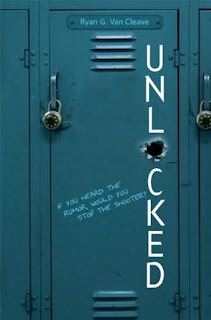 Title: Unlocked
Author: Ryan G. Van Cleave
Genre: YA fiction
Pages: 170
Rating: 4.5 out of 5
Challenges:
FTC Disclosure: I borrowed this book from my school library
Summary (from the inside flap of the book): Everyone said... everyone suspected... everyone thought... that in his locker Blake was hiding a gun. Andy didn't know Blake before he head the rumor about the gun. As the janitor's son, Andy has his own problems with nasty rumors. When their lower status creates an unexpected bond, Andy and Blake soon become best friends. No one else knows that it was really the gun that brought them together. It's their secret. But when Blake starts acting strangely, Andy wonders if the gun has unlocked emotions in Blake that are more than either of them can handle. Suspecting that Blake might have a deadly plan in mind, can Andy accept that some secrets shouldn't be kept?
Review: School shootings are all too familiar to us these days. We see the aftermath, and even the event itself, on TV. We can picture the shooters, the victims, the SWAT teams. The threat of violence lingers in the air when one works at a school and it's a wonder it doesn't happen more often with all the junk that students deal with on a daily basis: family problems; jailed parents; abusive situations; bullying; money problems; missing role models; and more. Couple that with no concept of consequences and it's a potentially deadly mix. We have lockdown drills, counselors available, and tons of other resources, but if a student sets their mind to it, my guess is that it's difficult to talk them out of their actions.

So, on that depressing note, I will say that the author of Unlocked did a really good job of showing the build-up to a possible event (I won't spoil things and tell you if the shooting takes place or not). This is a quick read because the book is told in verse from the perspective of Andy, a freshman in high school and the janitor's son. He is teased at school, has okay grades (though he is failing math), but doesn't have friends. He isn't even friends with the other three outcasts in his grade.

Then along comes Blake. He also has no friends and his dad was killed in Iraq. The two young men bond in a way that makes sense: they are both missing out on what's going on. They aren't destructive, they aren't mean, they aren't bad kids, they just are. And a gun is exciting, dangerous, and gives them something in common. But what do you do if you worry your friend will take that extra step?
Geography Connection: 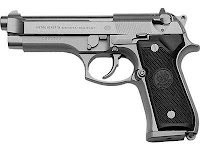 Click to see my updated Google Map. I have only been to Florida one time, two Christmases ago. The weather was good, the people were friendly, but I didn't even make it to Disney World or Epcot. Here's the only other book set in Florida that I have read over the past year:

Nice review! I'm looking to start reading more YA, since I really haven't read as much as I should for being a future middle school teacher. Will add that to my list! This one sounds like it has a lot for a YA to think about.

I'm Kate Evangelista, author of Taste, and I just wanted to take this time to introduce myself. If you have the time, please stop by The Coffee Bar by using the link below:

I hope to see you there.

Topher--Definitely start reading YA, it is so much fun: easy, quick, good story lines, and you'll definitely feel more connected to the students

Kate--Thank you for introducing yourself. I'll go check out the website

Sounds very good, Helen, if a bit depressing, just because of the subject matter. I can certainly see high schoolers being very interested though -- maybe an effective read for districts with anti-bullying programs? Thanks for your review!

Great review! I think I'd like to read this one. I sub sometimes at a local school and the things that these kids have to go through are crazy.

Connolly-Ahern--Interestingly, it wasn't a depressing read, more a window into the mind of a kid who isn't quite there socially

Notorious--It is amazing that kids come to school at all, really. I guess school can be the place that is predictable and safe for many of them. And, their friends are there

This book sounds well-done. I have read a couple of fiction books on shootings, and what irked me was they sounded more like the author tried to commercialize a tragic event. That's the main reason I avoid books set in real tragedies (9/11, school shootings, all the US wars within and with others, etc). But this book seems to be tackling the issue from a very unconventional perspective, so I think this is one that I would like to try.

Aths--one of the things I really liked about this book is that it isn't about a shooting, there is no glorification of an event. It's about friendship, build-up to an event, how to decide what's right and wrong, etc