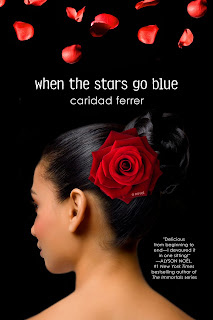 Title: When the Stars go Blue
Author: Caridad Ferrer
Genre: YA fiction
Pages: 324
Rating: 4.5 out of 5
Challenges: PoC; One, Two Theme (Dance); Reading from my Shelves
FTC Disclosure: I received this from my Secret Santa and am going to donate it to my school library
Summary (from the inside flap of the book): Dance is Soledad Reyes' life. About to graduate from Miami's Biscayne High School for the Performing Arts, she plans on spending her last summer at home teaching in a dance studio, saving money, and eventually auditioning for dance companies. That is, until fate intervenes in the form of fellow student Jonathan Crandall, who has what sounds like an outrageous proposition: forget teaching. Instead, why not spend the summer performing in the intense environment of the competitive drum and bugle corps? The corps is going to be performing Carmen, and the opportunity to portray the character of the sultry gypsy proves too tempting for Soledad to pass up, as well as the opportunity to spend more time with Jonathan, who intrigues her in a way no boy ever has. But in an uncanny echo of hte story they perform every evening, an unexpected competitor for Soledad's affections appears. One explosive encounter later, Soledad finds not only her relationship with Jonathan threatened but her entire future as a professional dancer in jeopardy

Review: I wasn't sure about this one when I received it and I thought it was an adult book. Boy was I wrong. I really enjoyed this novel, mostly because in some ways it is so different from other books out there. 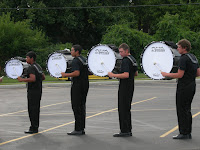 When I picture Miami I picture heat, palm trees, Latin music, Cuban food, bright colors and people that love life. There is a bit of that in here, but it certainly isn't over the top. This is the first book I've read set in Florida, and certainly set in Miami. I liked that the main character was Cuban, touching on that part of Miami's history without getting political. Click to see my updated Google Map.

Email ThisBlogThis!Share to TwitterShare to FacebookShare to Pinterest
Labels: 4.5 Stars, Challenge 2011, Romance, YA

I love reading books that have music or dance or some form of art as the basis. Even though, most of the terms will just go over my head, it feels great reading about something that's written with so much passion. This looks like a wonderful book in that respect.

Aths--This book didn't have any unknown terms or ideas, which was great. I think you'd like this one given the subject matter

So, glad you liked it. And this is a must have book for any school with a drum line.