Review: The Trouble with Half a Moon (Vigilante) 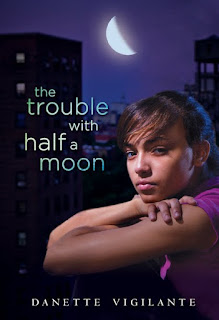 Title: The Trouble with Half a Moon
Author: Danette Vigilante
Genre: YA fiction
Pages: 178
Rating: 4 out of 5
Challenges: YA, POC
FTC Dislosure: I received the Advanced Uncorrected Galleys unsolicited from the publisher (it is due out in January 2011)
Summary (from the back of the book): Ever since the death of her younger brohter, Dellie lives with a sad, secret guilt that the accident that killed him was all her fault. But Dellie's life begins to hcange when she strikes up a friendship with Corey--a little boy who's just moved into her housing project building. Cory's often left home alone and hungry. Dellie feeds him, comforts him and becomes his protector; she hopes she can do for Corey what she couldn't do for her brother--save him. But she doesn't count on Corey saving her.

Review: At first I thought this book was a bit simplistic, but after about page 30 I got really into it and finished it in one day. Even though the main character, Dellie, is only 13 the story and she will appeal to high school students.

Dellie's brother is dead. She feels guilt about the accident, of which we don't get the details of until close to the end. While the whole family is devastated by his death Dellie's mother has pretty much given up on life and keeps Dellie in the house whenever she can "so nothing bad happens to her". As a mother I get it: we want to keep our children safe. However, I also get that Dellie is a teenager and needs to have a life. Luckily she gets one when she is at school. The story line also centers on Delli's friends, her crush, and the interesting collection of neighbors in her building.

The scenes with Corey and his abusive mother are very well done. I felt Corey's physical and emotional pain as well as his mother's pain as a parent who just cannot get the job done well. The author also did a really good job with Dellie's relationship with her new neighbor Shirley, the development of her own issues, and how she felt about Corey. It would be so easy to just pull at the reader's heart strings by playing the abuse card, but this book doesn't do that. It shows us how we are all connected to one another, have an impact (for good or bad) on each other, and how, if we let others in, our lives can change.