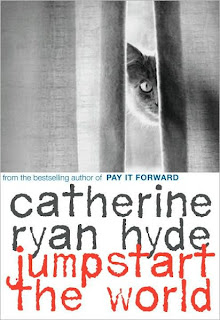 Title: Jump Start the World
Author: Catherine Ryan Hyde
Genre: YA
Pages: 186
Rating: 4.5 out of 5
Challenges: YA, GLBT
FTC Disclosure: I borrowed this book from my school libary (and it was donated to the library)
Summary (from the inside flap): Elle is a loner. She doesn't need people. Which is a good thing, because she's on her own: she had to move into her own apartment so her mother's boyfriend wouldn't have to deal with her. Then she meets Frank, the guy who lives next door. He's older and has a girlfriend, but Elle can't stop thinking about him. Frank isn't like anyone Elle has ever met. He listens to her. He's gentle. And Elle is falling for him, hard.

But Frank is different in a way that Elle was never prepared for: he's transgender. And when Elle learns the truth, her world is turned upside down. Now she'll have to search inside herself to find not only the true meaning of friendship but her own role in jumpstarting the world.

Review: The author of this book also wrote Pay It Forward, which was a movie that I really liked. Great message and story line. This book has that in common: the messages are really good and clear without hitting you over the head.

Elle is young to be living on her own (mom does pay the rent) and I kept thinking she was a few years older. At first this bothered me, but I realize from working in a high school that students have all sorts of living situations that seem scary or strange to me and, for them, it just is what it is and they deal with it. Having Frank and his girlfriend Molly living next door is life-saving for Elle. They are interesting, caring, compassionate, and they look out for her, guiding her through the time frame of the book. Elle's feelings for Frank aren't icky in an older-younger person kind of way; it seems very real and is handled well.

I also like the way Molly's relationship with Elle develops through a common interest in photography. Photography also helps Elle to deal with her situation, things she is learning about in the "real world" and her own feelings about friends and family. Speaking of friends, Elle doesn't have many. She is taken in by a group at her school who are definite outsiders, but that was great since they were all-accepting and a great support. I liked those characters and what they brought to the story.

My only complaint is Elle's mother. She is present in the beginning as she moves Elle into her own apartment and then she appears at the end and it felt too simple of a wrap-up for me.

This book deals with great issues: transgender, LBGTQ, friendships, crushes, responsibility, mental illness, and more, but it doesn't feel like the author tried to squeeze in too much. There is a lot going on and this book will give the reader a lot to think about.

Melissa (i swim for oceans) said...

I've been wondering about this one, and I'm glad I read such a positive review of this one! I'm definitely adding it to my list. Great review :)

Melissa--I didn't really know what to expect and I was pleasantly surprised. I hope you read it and enjoy it

I've been curious about this one. I didn't know she wrote "Pay it Forward" too. That movie was really sad but had such a strong message.

Marie--I had no idea it was the same author either! When I went to her web site there were a bunch of books that I didn't realize she had written