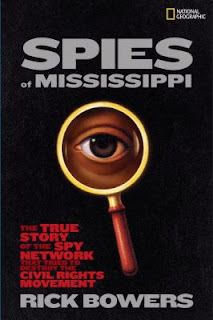 Title: Spies of Mississippi: The True Story of the Spy Network that Tried to Destroy the Civil Rights Movement
Author: Rick Bowers
Genre: YA non-fiction
Pages: 107 (plus bibliography and documents)
Rating: 4.5 out of 5
FTC Disclosure: I borrowed this book from my school library
Summary (from the inside flap): Twelve of the most powerful men in the stat controlled a secret network of spies and informants. A cadre of operatives using names like Agent X, Agent Y and Agent Zero. Neighbors spied on neighbors, Teachers spied on students. Ministers spied on churchgoers. Spies spied on spies. This government-run spy network tracked private citizens right here in the US and not too long ago either--in the state of Mississippi during the height of the civil rights movement of the 1950s and '60s.

The book begins in 1956 with the birth of the Mississippi State Sovereignty  Commission and follows its terrifying evolution from State-run propaganda outlet to clandestine espionage network and quasi-secret-police-force with the mission of saving segregation....

Review: This book is a really fast read and is definitely geared toward a high school audience: the writing isn't complex like some adult non-fiction books can be. Students will definitely not get bored reading this since it is full of harrowing stories, spies, murder, and down-right awful behavior. Even though I've read a lot about the Civil Rights era (the book covers the Freedom Riders, Edgar Mevers' murder, the attempts at integrating the Mississippi public schools and universities) this book gave me a whole new angle about which to think: what was really going on behind the scenes to make sure Civil Rights did not work in Mississippi. One thing that is really good for students is that the book assumes they don't know who the cast of characters and groups involved are and give a quick explanation and background so that it all makes sense.

I guess I shouldn't be surprised when I read books like this, but I have such a difficult time understanding the hate and fear that the white supremacists in this book must have felt. Were they really so afraid that African Americans would take over? Taint their own children? Ruin their lives? I guess they were. This book reveals documentation from the Sovereignty Commission that is amazing: quotes from governors and other government officials who swore they would never integrate Mississippi; African Americans who spied on the Civil Rights workers and NAACP to go against change in the state; and more.

This book is great for background information on the Civil Rights movement, the segregationist movement, US culture in the late 1950s and '60s, and a look at how a government can work behind the scenes to control the destiny of a state.

Email ThisBlogThis!Share to TwitterShare to FacebookShare to Pinterest
Labels: 4.5 Stars, Non-Fiction, POC, YA

I'd never heard of this book before, but from the title I can imagine it'd be the kind of book that you wouldn't get bored ready. All the hate that happened during this time is hard for me to understand, too.

Sounds intense. I never read a non-fiction YA before. Will have to look out for it.

No matter how many books I read on the Civils Rights era, I can never stop wondering how people could hate so much. Where is all that emotion coming from? Humans were definitely not stupid then, just as they are not now, then how did such a mass of people end up with the same agenda? I could ask this question wrt so many countries and cultures too. It's mind-blowing the reasons people come up with. Great-sounding book!

Kim and Aths--I don't get the hate either! What is so scary about different?

Darlyn--I hadn't really read a non-fiction geared to youth either, but this one did a nice job on background for those who may not know all the players in the Civil Rights era 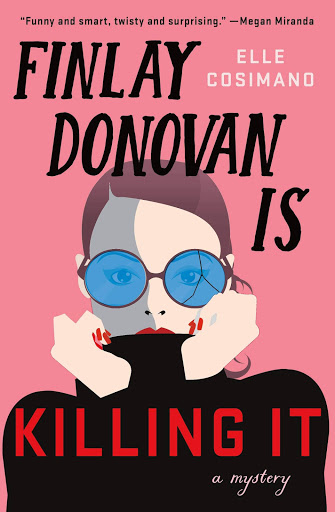