Review: How I Live Now (Rosoff) 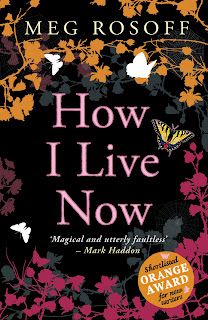 Title: How I Live Now
Author: Meg Rosoff
Genre: YA fiction
Pages: 194
Rating: 4 out of 5
Challenges: YA
FTC Disclosure: I borrowed this book from my school library
Summary (from the back of the book): Fifteen-year-old New Yorker Daisy is sent to live in the English countryside with cousins she's never even met. When England is attacked and occupied by an un-named enemy, the cousins find themselves on their own. Power fails, systems fail. As they grow more isolated, the farm becomes a kind of Eden, with no rules. Until the war arrives in their midst. Daisy's is a war story, a survival story, a love story--all told in the voice of a subversive and witty teenager.

Review: What an interesting book! I think I imagined a WWII type of story: romanticizing orphans in the English countryside playing with all their free time and enjoying themselves. That is not what this book is like. The enemy and the war are never named, the time is the present (there are cell phones), and the war seems to be taking place in separate events all over the world. No one really seems to know what's going on except that "they" are attacking, killing, starving civilians, and it's all going to affect Daisy and her cousins really soon.

I really liked the friendships/relationships between Daisy and her cousins (Piper, Isaac, Osbert, and Edmond). The fact that they supported themselves for a while didn't seem out of place or fantasy-like, just that is was something they had to do given the circumstances.

Once the cousins are brought into the events of the war the novel takes a major turn from fun on the farm to death, hunger, fear, and other emotions/experiences common in war time. The author does a good job of showing that everyone is affected during a war, not just the soldiers. And, it's all told from a fifteen-year-old's perspective, which was intriguing.

I do plan on reading this . . . hopefully sooner rather than later!

That sounds like an interesting setting for war - a YA novel, orphans, modern setting, but not the usual trite plotlines. I'm pretty fascinated with war books - it will be interesting to read it from the perspective of a teen.

I own a few of her books and need to try this author soon. Thanks for the great review on this one.

I really loved this one, an all-time favourite. Meg Rosoff is a gifted storyteler. I loved how the enemy remained nameless...

Stephanie and Aths--I hope you get to it eventually; it's good

Bibliophile--I hadn't heard of this author before my assistant suggested I read this book. I am not sure what else she read so I look forward to hearing what you think of her other stuff

Library Gal--I agree, she did a great job of weaving the story and the nameless enemy was very powerful