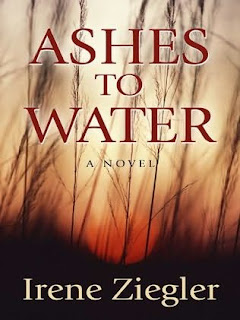 Title: Ashes to Water
Author: Irene Ziegler
Genre: Adult mystery
Pages: 394
Rating: 4.5 out of 5
Challenges: TLC Book Tour
FTC Disclaimer: I was given this book free from the author as part of the book tour. And, no, that didn't influence my review.
Summary (from the website): Set in the 1980s, Ashes to Water is an atmospheric story of a small-town Florida murder and one young woman's reluctant involvement in its resolution. When Annie Bartlett returns home to bury her murdered father, she confronts the woman arrested for the crime, only to discover reasons to fight for the woman's acquittal. This pits her against her erratic and unwell sister, Leigh, whose very survival may depend on a guilty verdict.

Annie soon becomes snarled in the social and political dynamics of the town, a wrenching attraction to her old boyfriend, and the emotionally difficult business of sorting out her estranged father's tangled past. Obstructing Annie further are "visits" from her mother, who drowned in Widow Lake when Annie was nine. As her attempts to solve her father's murder lead to more bloodshed, Annie finds herself a suspect in a plot not of her making, and a threat to the town's movers and shakers, suddenly very anxious to see her gone. When Annie's father is finally laid to rest in the lake that claimed her mother, Annie glimpses in his sinking ashes the flashing glints of hope and healing.

Review: I read this book as part of the TLC Tours and must confess that I am always a bit wary if I haven't chosen a book off a bookshelf or another review. Don't get me wrong, I choose the books I want to read for the TLC Tours, but it feels different somehow. That said, I really liked this book! It is character-driven, face-paced, and interesting.

Irene Ziegler has created a small town in Florida where everyone is in everyone's else's business, they are all connected (for better or worse) and no one forgets the past. Poor Annie thinks she is just returning to DeLeon to bury her father, but that would be far too simple. Past boyfriends, nosy neighbors, issues with developers, and her relationship with her mom, dad, and druggie sister all collide to create one big mess!

The characters seem real as do the conversations. I felt like I got to know the cast of characters well through Ziegler's physical descriptions and the way they each spoke. The story isn't told from just one character's perspective, but by a narrator so the reader gets to hear from everyone at some point in time. In a mystery, that works really well.

This is a murder mystery, but don't expect just one victim or just one suspect. It seems the whole town is involved at some level, yet it doesn't feel contrived or fake. The truth reveals itself slowly, not ending suddenly, which I liked.

Even I get wary when I read a review book. And that makes me postpone reading them.

This book sounds interesting - like a mass controversy that a whole town is involved in. I'll be looking for this one. Great review!

Aths--This book stuck with me more than I expected, which I figure is always a good sign.

Thanks, Helen, for your thoughtful review of my book. I know how hard it is to pick up a book you're jazzed about reading, and how much time and effort goes into reviews. I really appreciate your willingness to take a chance. And, of course, I'm THRILLED you liked the book! If you'd like to read the prequel, please check out RUles of the Lake for Annie's back story. Best wishes and thank you again, Irene Ziegler

I know what you mean about review books, so it's always nice to find that I've really enjoyed one ... and it looks like that was the case here. :) I love that the story is so complex yet so believable - that's what I look for in a mystery novel. Thanks for being a part of the tour!

Irene--I have a copy of Rules of the Lake and will read it in the next few months. I am looking forward to learning a bit more about Annie

Heather--I agree that the story was complex, but that's one of the things I liked about it