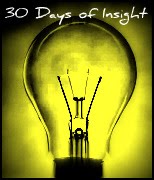 Day 8: Who would I like to see become president of the US?
I've known this question was coming since I skimmed down the list on day 1 so it's been rolling around in my mind for about a week. I kept hoping that a name would appear, someone I completely trust to do the right thing if given the chance. But, no one comes to mind. Sure, there are people whose ideas I would like to see put out there (Dennis Kucinic for one), but I realize I don't want to just pick the president, I want to hand pick the Congress as well so that the president of my choice can actually get stuff done!

So, instead, I'll say the type of person I would like to see as president: intelligent with a sense of humor; interested in the world around him/her; a parent; someone who has spent time living in other countries amongst the poor, the ill, and the less fortunate; someone who is willing to talk first and go to war as a last resort; someone who truly believes that ALL Americans deserve a great education, a job they are qualified to do, and medical care.

Hmmmm. Basically I've just described myself, but I certainly don't want the job :-)

I wouldn't want the job either! Good answer!