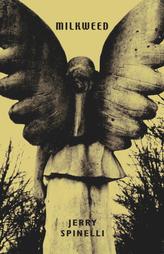 Title: Milkweed
Author: Jerry Spinelli
Genre: YA, Historical Fiction
Pages: 208
Rating: 3.5 stars out of 5
Challenges: YA, Social Justice (genocide)
FTC disclosure: I borrowed this book from my school library
Summary (from the back of the book): He's a boy called Jew. Gypsy. Stopthief. Filthy son of Abraham. He's a boy who lives in the streets of Warsaw. He's a boy who steals food for himself, and the other orphans. He's a boy who believes in bread, and mothers and angels. He's a boy who wants to be a Nazi, with tall, shiny jackboots of his own--until the day that suddenly makes him change his mind. And when the trains come to empty the Jews from the ghetto of the damned, he's a boy who realizes it's safest of all to be nobody.

Review: I have read so much Holocaust literature that is so amazingly powerful, emotional, and wonderful that I think I am harsh on this genre. For me, Milkweed was okay, but not great. I liked that it was from a perspective I hadn't read before: that of an orphan in Warsaw. However, I just didn't care enough about the main character. He was too stupid and uninformed: he doesn't know the word medicine, Nazi, and many other words that all children would have known in the early 1940s. The other characters were interesting and definitely rounded out the story.

I did like the book better once the characters entered the Warsaw ghetto since the descriptions of the living conditions and the main character's escapes into the outside world were really good. Unfortunately, this wasn't enough to get me to love this book.


Have you read Milkweed? What did you think?

Email ThisBlogThis!Share to TwitterShare to FacebookShare to Pinterest
Labels: 3.5 Stars, Historical Fiction, YA

I felt the exact same way about The Boy In the Striped Pajamas! I wonder now if Spinelli's book influenced the author! I had absolutely no sympathy for the Boy in the Stripe Pajamas and was completely unaffected by the ending.
Here's to better reading!

Campbele--I liked the Boy in the Striped Pajamas better than Milkweed, but wasn't hugely impressed by either one of them

i thought it was an anazing book