Review: When She Flew (Shortridge) 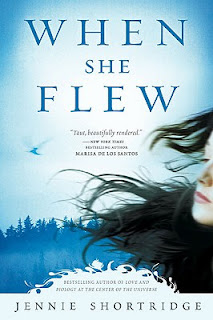 Title: When She Flew
Author: Jennie Shortridge
Genre: Adult
Pages: 322
Rating: 4 out of 5 stars
Challenges: POC and my book group
FTC Disclosure: I bought this with my own money
Summary (from the back of the book): Police officer Jessica Villareal has always played by the book and tried to do the right thing: She's worked hard at her job and even harder at her family. Despite al that, she finds herself approaching midlife divorced, estranged from her daughter, alone... and completely unhappy. And she's wondering if she ever made a right choice in her life. But then Jess discovers an Iraq vet and his young daughter living off the radar in the Oregon woods, avoiding the comforts--and curses--of modern life. Her colleagues on the force are determined to uproot and separate Lindy and her father, but Jess knows the damage of losing those you love, and believes the pair is safer and happier together. Jess recognizes her chance to make a difference by doing something she's never dared. Because even though she's used to playing by the rules, there are times when they need to be broken....

Review: This book is one of those books that I liked from the start and it grew on me as I read. I cared about Jess and why she made the choices she did. I wanted things to work out for her, for her to feel like she made the right choices and that it was all going to be okay. Perhaps because, like Jess, I am in my mid-forties (though I keep forgetting that fact), divorced, and raising a daughter. True, Jess is a grandmother (!) and a police officer and I am certainly not. But, this is a police book that is different from others I have read. It's decidedly more female. Rather than concentrating on the chase, the shooting, etc it focuses on the emotions, the decision-making, what's right and wrong with the social services system, etc.

I knew I'd like this book when very early on Lindy and her dad are first discovered by birders (my parents are avid birders). This also set the tone for an infusion of nature into this book; birds and animals appear often as metaphors as well as reality and it's a nice touch. I think it adds to the soft feminine feel of the book. I don't mean that it is fluffy and "pink", but that there is a calm and peaceful feeling throughout the novel. It's hard to explain.

I believed in the characters in this book as well. Though we get to know them all through Jess' eyes, I liked how her relationship with her estranged daughter evolved, how her boss was stern, but looked out for her, and I really liked Chris (Z man) who seems so genuine and kind. He gives me hope for Jess' future.

My version of the book has a Question and Answer section with the author and I feel like this really added to the book. I found out it's based on a real news story of a girl and her dad who were living in the woods of Oregon!

I really enjoyed this one, too...I lived in Oregon as a kid, so I'm a sucker for books set there. But I also thought the father-daughter story was different and compelling.

this would be a great read.and based on a true story of father-daughter is sweet!

This book sounds interesting! I haven't heard of it, thanks for bringing it to my attention!

Softdrink--I also thought the whole concept was compelling: what society says is "ok" for a living situation, what is neglect, etc

Darlyn--I agree, there aren't very many good father/daughter relationships out there in literature so this was really nice to see.

Aths--I did enjoy it. And, my book group meets in a couple weeks; I can't wait to see what they all thought of it. Oh, you have a new avatar/photo! Very nice

I feel like everyone who read this book really enjoyed it. I also think it must be one of those that you read and then later on, comes back to you with new nuances and ideas (I am just guessing based on the plot on this part- I haven't actually read it). I always like that!

Aarti--funny you should mention that it sounds like a book one would think about later. That's exactly what's happening. The plot and characters will pop into my head at interesting moments.