Review: The Boy in the Striped Pajamas (Boyne) 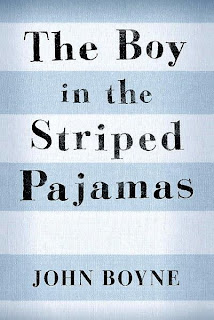 Title: The Boy in the Striped Pajamas
Author: John Boyne
Genre: YA, Historical Fiction
Pages: 216
Rating: 4 out of 5 stars
FTC Disclosure: I borrowed this book from my school's library
Summary (from the back of the book): If you start to read this book, you will go on a journey with a nine-year-old boy named Bruno. (Though this isn't a book for nine-year-olds.) And sooner or later you will arrive with Bruno at a fence. Fences like this exist all over the world. We hope you never have to encounter one.

Review: I have read so much literature (fiction and non-fiction) on the Holocaust that perhaps I had hyped-up expectations for this book. I wanted it to be a 5. Half way through the book I was going to rate it a 3.5, but the second half, and the huge surprise ending, raised it to a 4. I also thought the interview with the author at the end made me like the book more since I got to see why he took the perspective that he did.

It is going to be difficult for me to write a review of this book because there are basics in the story that you just shouldn't know before reading it. I do like that this book was written from the perspective of a nine-year-old boy. He is innocent in the ways of the world, certainly does not know who Hitler is and his political dealings/actions, and is more concerned with friendships, school work, family life. That part I really liked.

In the author interview Boyne says people always ask him how he can have the characters not know about the Holocaust. When I first started studying the Holocaust in high school and later in college (I was a German Studies major) I thought the same thing as well. But, hindsight is twenty-twenty and we cannot put our knowledge onto past events. Unless we live through something ourselves, we cannot presume to know what others knew or why they acted the way they did. Would I have stepped in to help during the Holocaust, the Rwandan genocide, in the southern US during slavery or the racial riots? I like to think I would have, but in reality, if my life or that of my family were threatened, I am not sure.

One day in my German Literature class we got onto the topic of the Holocaust and I asked my professor what she had known at the time (she was an elementary school student). I asked her how they couldn't have known what was going on. She really opened my eyes to reality. She was in a small town with only 2 Jewish families. Within the span of a couple weeks the 3 Jewish students stopped coming to school. Whey students asked the teacher about it she said they moved away. As a teacher in Santa Barbara in the 1990s and 2000s, I have students who "disappear" all the time and I am told by the administration that they moved. I assume it's true. When I put it to my history students like that, they get it more. People move.

I am not excusing what happened in Europe in the 1940s (or Rwanda in 1994, or during our ugly eras of racial prejudice), but it is interesting to read a book from the perspective of a child who knows nothing of politics, concentration camps, and hatred. Bruno talks of the Fury (Fuhrer) and Out-With (Auschwitz), which is accurate: small children often mispronounce words so don't quite get what's going on.

This is a quick and interesting read even though the story line is improbable (2 boys meeting at a fence), it is worthwhile, important, and made me think about the Holocaust from a new perspective.

Thanks to commenters for this link to an interesting online interview with the author.

It was helpful to me to think of this book as a fable, rather than "real" life (whatever that is). Even Bruno's room was facing in the "right" direction to make him more interested in the fence than his sister, for example. I thought the ending was powerful, and I still occasionally think about it now, 2-1/2 years later.

This link will take you to all the BSP (Boy in Striped Pajamas) posts during my online book club's discussion of it in November 2007.

When you pick up this book you know where it is heading. You just do. We know the history. But, this ending was shocking...I was shocked to bits and started crying. Really something special. I kept thinking about it for days after I finished it. The Holocaust is something we can't ever forget. I'm not even sure it was the writing and story that was so good to me, but just the remembrance of it all, and showing how the tables were turned, and how did we feel then? Interesting twist. I loved the book and hated it. Hated it for the history.

Loved this book and the movie as well. I was unprepared for the ending -- shocking.

I haven't read it yet but it's on the wishlist. Loved your review - thank you for not giving anything away, you're a star.

If you're interested there is a BBC podcast from the "World Book Club" series on this book. John Boyne answers questions about this book for about an hour and it's pretty interesting. The link is: http://www.bbc.co.uk/podcasts/series/wbc/. The link is to the right in the "Previous Episodes" box.

Bonnie--that's a great idea about the fable angle. In fact, it says fable on the second title page and I forgot about that. The ending is very powerful! Thanks for the link

Mary--I agree; each time I read a book about the Holocaust I am moved again.

Diane--I have heard the movie is good. One of our teachers just asked me to order it so I'll have to watch it when it arrives.

Kathmeista--Thank you for the link. I do recommend this book, especially if you follow Bonnie's advice and think of it as a fable

I read this last year and didn't see the ending coming. I think this is a book for adults more so than for kids - you'd only get the ending if you know something about the holocaust...

Christa--I have been thinking a lot about if it is an adult or YA book. High school students (sophomore on) really have learned a lot about the Holocaust so would "get it", I think.

I was wondering where I heard of this book recently. A movie has been made of it. I am really interested in the subject matter, especially to look at it from the viewpoint of a nine-year-old.

I know a lot of people really like this book, heck they turned it into a movie! I was never able to like the main character and never developed any sympathy for him. I admit, people think I'm hard core (I'm not!!!!) but I just couldn't enjoy this book.

Aths--I actually want to see the movie to see how it was done.

Campbele--I get how you could not like this book. I wasn't sure about it as I read it; the last 40 pages or so made me like it better.