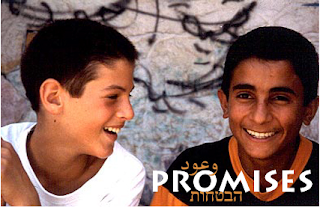 Title: Promises
Author:
Genre: Documentary (Israel/Palestine)
Pages: 106 minutes
Rating: 5 out of 5
FTC Disclosure: I bought this video
Challenges: Social Justice
Summary: (from the website):
PROMISES explores the nature of these boundaries and tells the story of a few children who dared to cross the lines to meet their neighbors. Rather than focusing on political events, the seven children featured in PROMISES offer a refreshing, human and sometimes humorous portrait of the Palestinian-Israeli conflict.

PROMISES, a film by Justine Shapiro, B.Z. Goldberg and co-director and editor Carlos Bolado, was shot between 1995-2000.


The Children
The 7 children featured in PROMISES were filmed over 4 years when they were 9-12 years old:
Arabic, Hebrew and English dialogue with English subtitles.

This sounds amazing! I really want my homeschooled kids to watch it.

This does sound good. I am trying to think where I have heard of it before. Nice review!