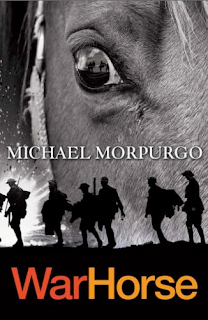 Pages: 182
Rating: 5 out of 5
FTC Disclosure: My daughter got this as a gift
Summary: (from Booklist): This searing World War I novel reveals the unspeakable slaughter of soldiers on all sides fighting against people who are just like them. The story is told by an English farm horse, Joey, and the first-person narrative blends the animal's physical experience with what men say. On the farm, Joey has close ties to Albert, who is too young to join up when his dad first sells Joey to the army. Charging into battle under machine-gun fire, Joey is captured by the Germans, who train him to haul ambulances and guns. His reunion with Albert in battle is sentimental and contrived, but the viewpoint brings close the fury of the thundering guns, the confusion, and the kindness of enemies who come together in No Man's Land to save the wounded horse. Joey's ability to understand the language wherever he is--England, France, Germany--reinforces the novel's antiwar message, and the terse details speak eloquently about peace

Review: Sophia loved War Horse! When I asked her why she immediately responded "because it was told from the horse's point of view". She said it was sad when characters, both human and horse, died but also happy as when characters survived and were reunited. She thought the war descriptions were interesting and it stimulated great discussions between us about World War I (I was a history teacher). Sophia is 9 and reads at a 5th grade reading level; she felt like this book was at a good reading level for her with some unknown words. That is partly because 9 year olds don't know war terminology (thank goodness!). Sophia's favorite character was Joey, the main horse. When I asked her if she felt like she got an idea of what WWI was like, her response was funny: yes, but "it was probably much more realistic when it really happened".


I, Helen, also enjoyed the parts of War Horse that I heard when Sophia read them aloud to me! It is historically accurate, giving the reader a true sense of what World War I was like for both sides of the battles. The descriptions of the trenches, the uniforms, and the attitudes are all vivid and add to the book's appeal. The characters are interesting and well-developed. I liked that the horse spent time with British, French and German soldiers, showing that on both sides they were just young men who were similar: fighting a war that they weren't really sure about. As an adult I enjoyed this book, even though it is aimed at a younger audience. I really look forward to reading Morpurgo's YA book Private Peaceful, which we have in our library at school.

Interesting! I read Private Peaceful a couple of summers ago and it was very moving! I'll have to keep my eyes open for War Horse! :)