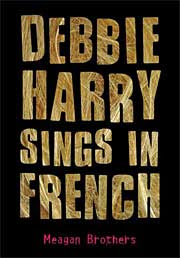 Title: Debbie Harry Sings in French (unfortunately, this is the publisher's site since there isn't one for the author)

Author: Meagan Brothers
Genre: Fiction/Youth Lit/LGBTQ
Pages: 234
Rating: 5 out of 5
FTC Disclosure: I got this book from my school's library
Challenges: Young Adult (#1) and GLBT (#1)
Summary: (from the inside flap): Johnny's had kind of a tough life so far, and he's always been a bit of a freak. But when he discovers Debbie Harry, lead singer of Blondie, he not only falls in love with her music, but also realizes he kind of--sort of--wants to be her. He wants to be cool and tough and beautiful like her. He wants to dress like her. He's not gay, at least he doesn't think so. So what does it mean? And what should he tell his amazing new girlfriend?


This witty and tender novel introduces shades of gray into the black-and-white ideas of sexuality and gender. Anyone who has ever wished to be a little bit tough and a little bit glamorous will recognize Johnny's struggle.

Review: Life for LGBTQ (Lesbian Gay Bisexual Transgender and Questioning) teens is not easy. Not only are they struggling with questions themselves, but they have to deal with other teens who ridicule and hurt them for being different. While all humans have trouble with those who are outside the norm, for whatever reason, teens who step outside are particularly open to harrassment and tough times from those who feel threatened by differences. Meagan Brohters does a great job at dealing with the life of a teen on the outside of mainstream high school life (Johnny is goth, questioning, and in trouble). But Johnny is not alone and I like that. Students at my school who are alternative due to interests, the way they dress, whom they date, or whatever do so much better when they have the safety net of family, friends and supportive teachers/staff!


I liked this book from the first page! There is something about Johnny that just pulled me in and made me want to read more about him; I wanted him to be happy and to be okay. And, in the end, he is even though many would say that he isn't (because of his lifestyle choices). But the ending isn't all roses and "happy ending" either; it leaves the reader with hope, but knowing that there could be stormy times ahead for the Johnny. Johnny feels so much better, but also knows that things are not going to easy either.


There was so much to like in this book: the characters, the references to music (all from the 1980s, which is my era), the way the issues are dealt with, the plot, the pace....just everything.

Seems like a lovely book! I just posted my first review for the GLBT Challenge. I read a wonderful YA short story collection How Beautiful the Ordinary.
Here's a link to my review, if you want to take a look:http://abookblogofonesown.blogspot.com/2010/01/how-beautiful-ordinary.html

Thanks for introducing me to this book (which I now plan to read). High School can be tough for teens who are different, and books like this can help. I'm glad there are people like you working in our school system. Aloha from your new reader, Rob

Nice review. I have this book and really need to read it...maybe for the GLBT challenge since I'm a part of that too. I'm glad you enjoyed it. Sounds great.

Helen, I felt that way about Luna by Julie Ann Peters. It left me feeling hopeful. I very much like Ms. Peter's style.

I'm out checking other bloggers reviews for the Y.A. Challenge.Your description of Johnny and how you wanted him to be happy makes me want to read the book. Thanks!