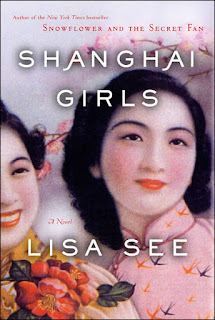 Genre: Fiction/Historical Fiction
Pages: 309
Rating: 5 out of 5
FTC Disclosure: I got this book for Christmas
Challenges: Global Challenge (Asia) and my MUS moms book group
Summary: (from the inside flap): In 1937, Shanghai is the Paris of Asia, a city of great wealth and glamour, the home of millionaires and beggars, gangsters and gamblers, patriots and revolutionaries, artists and warlords. Thanks to the financial security and material comforts provided by their father's prosperous rickshaw business, twenty-on-year-old Pearl Chin and her younger sister, May, are having the time of their lives. Though both sisters wave off authority and tradition, they couldn't be more different: Pearl is a Dragon sign, strong and stubborn, while May is a true Sheep, adorable and placid. Both are beautiful, modern, and carefree...until the day their father tells them that he has gambled away their wealth and that in order to repay his debts he must sell the girls as wives to suitors who have traveled from California to find Chinese brides.
As Japanese bombs fall on their beloved city, Pearl and May set out on the journey of a lifetime, one that will take them through the Chinese countryside, in and out of the clutch of brutal soldiers, and across the Pacific to the shores of America. In Los Angeles they begin a fresh chapter, trying to find love with the strangers they have married, brushing against the seduction of Hollywood, and striving to embrace American life even as they fight against discrimination, brave Communist witch hunts, and find themselves hemmed in by Chinatown's old ways and rules.
Review: I was really excited to read this book because I have heard such good things about Lisa See's books. But I was not really into it and even considered giving up at about page 40. I promised myself I would read to about page 70 and by then I was hooked! I LOVED this book! I cared about the characters and liked the way See had the sisters argue, love one another, change roles as they grew up, and support one another. The supporting characters: family, friends, and enemies were all so well developed that I felt I was in Pearl's life, seeing what she saw and truly understanding their experiences.


See's treatment of China as the Japanese invaded and Los Angeles' Chinatown were wonderful. The sights, smells, atmosphere, and textures were so well described that I feel like a have a better understanding of what life for Chinese arriving in California must have been like. How horrible to put up with the discrimination and distrust from white America from the moment they arrived at Angel Island in San Francisco to walking the streets, attending school, and owning a business.


While Shanghai Girls seems like it is full of tragedy, I didn't feel depressed reading it, rather I was fascinated and hopeful for their future. I highly recommend this book!
Posted by Helen's Book Blog

Whew! I thought you were going to say you hated it! I felt the same way about The Book Thief, but after about 70 pages I loved it. I have this in my TBR pile, so it's good to hear a good review.

Mel U, I also dont' buy myself hard back books (unless I can get them cheap at Costco!). This one was a Christmas present

Miss Attitude, for Banerjee books, I'd read Maya Running if you want YA and either Invisible Lives for adult. They're fun!

Thank you for this insight into a very different culture!

Usually I also give a book a proper chance, at least if I have heard good things about it.

Good review! I really want to read this book soon!

It is a good review. Want to read it. I loved Snow Flower and....