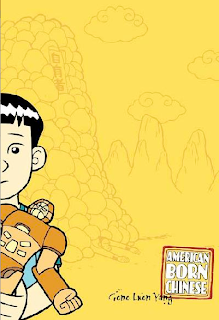 Title: American Born Chinese
Author: Gene Luen Yang
Genre: Graphic Novel/YA
Pages: 233
Rating: 4 out of 5
FTC Disclosure: I borrowed this from my school library
Challenges: Graphic Novel Challenge (#5)
Summary: (from the inside flap): All Jin Wang wants is to fit in. When his family moves to a new neighborhood, he suddenly find that he's the only Chinese-American student at his school. Jocks and bullies pick on him constantly, and he has hardly any friends. Then, to make matters worse, he falls in love with an all-American Girl.... Born to rule over all the monkeys in the world, the story of the Monkey King is one of the oldest and greatest Chinese fables. Adored by his subjects, master of the arts of kung-fu, he is the most powerful monkey on the earth. But the Monkey King doesn't want to be a monkey. He wants to be hailed as a god.... Chin-Kee is the ultimate negative Chinese stereotype, and he's ruining his cousin Danny's life. Danny's a basketball player,a popular kid at school, but every year Chin-Kee comes to visit, and every year Danny has to transfer to a new school to escape the shame. This year, though, things quickly go from bad to worse....
Review: Yes, I am having a graphic novel extravaganza! I took on the challenge and am going for it. It's fun to read them; there's a sense that I've read a lot since I can finish them so quickly. I had heard from a number of sources that this was an awesome graphic novel so I brought it home this weekend to read. I liked it, but didn't love it. There are three story lines in the beginning (see A, B, and C in the summary) and they very cleverly merge by the end of the book. It was also nice to finally read the Monkey King fable since I had heard about that as well but never read it.
The art work is fun in this book with great colors; it evokes a feeling of lightness and frivolity without being childish. It was painful at times to read the Chin-Kee/Danny story as it brings out all the horrible stereotypes that our culture has about Chinese people. But for that reason, this is a great book for people (especially students) to read: it shows how outrageous those ideas are and the effect they have on people without being preachy.
Posted by Helen's Book Blog

Email ThisBlogThis!Share to TwitterShare to FacebookShare to Pinterest
Labels: Graphic Novel, POC, YA

Looking forward to reading this book. Thanks for the review. I've never even heard of the Monkey King fable, I'm curious now :)

I have this book in my owned TBR. I think I shall bump it up because of your great review!

Thanks for the great review! I also joined the Graphic Novel Challenge, which is a little step out of my normal reading material, but it's a fun challenge! I was thinking about picking this up to read for the challenge- it's one of only 2 graphic novels that were ever nominated for the National Book Award. Stitches was the other, and that was I just reviewed! Have fun with the challenge! I look forward to reading more of your reviews and suggestions!