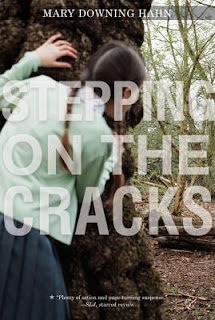 Title: Stepping on the Cracks

Pages: 216
Rating: 4.5 out of 5
Summary: (from the back): A blue star hangs in Margaret's living room window. The star means her brother is fighting the war Hitler started. There are stars in lots of windows in her town.

The brother of Margaret's best friend, Elizabeth, is fighting in the war too. But neither girl is really worried. After all, this is the good war and the Americans are the good guys. Their brothers will come home safe as soon as the good guys win. In the meantime, the girls wage their own war against the class bully, Gordy.

But then the girls stumble upon Gordy's secret. Suddenly he doesn't seem like much of a bully anymore. But not only have their feelings toward Gordy changes; now they're questioning the war. Is it such a good war after all? Is there really any such thing?

Review: It took me a while to get into this book and I'm not sure if I wasn't in the right space for it or if I didn't like that it's aimed at junior high/early high school level. Whatever the reason, I got over it and ended up enjoying the book! Margaret and her friend Elizabeth are like so many girls living in small town America pre-1980s: riding bikes, home in time for dinner, on their own, and hanging out in tree houses they've built. Sounds like my childhood of the 1970s.