The Children's Blizzard by Melanie Benjamin 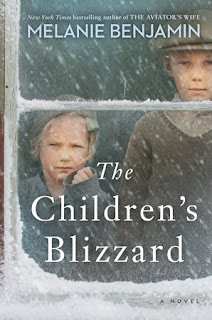 Summary (from Amazon): The morning of January 12, 1888, was unusually mild, following a punishing cold spell. It was warm enough for the homesteaders of the Dakota Territory to venture out again, and for their children to return to school without their heavy coats—leaving them unprepared when disaster struck. At the hour when most prairie schools were letting out for the day, a terrifying, fast-moving blizzard blew in without warning. Schoolteachers as young as sixteen were suddenly faced with life and death decisions: Keep the children inside, to risk freezing to death when fuel ran out, or send them home, praying they wouldn’t get lost in the storm?
Based on actual oral histories of survivors, this gripping novel follows the stories of Raina and Gerda Olsen, two sisters, both schoolteachers—one becomes a hero of the storm and the other finds herself ostracized in the aftermath. It’s also the story of Anette Pedersen, a servant girl whose miraculous survival serves as a turning point in her life and touches the heart of Gavin Woodson, a newspaperman seeking redemption. It was Woodson and others like him who wrote the embellished news stories that lured northern European immigrants across the sea to settle a pitiless land. Boosters needed them to settle territories into states, and they didn’t care what lies they told these families to get them there—or whose land it originally was.
At its heart, this is a story of courage, of children forced to grow up too soon, tied to the land because of their parents’ choices. It is a story of love taking root in the hard prairie ground, and of families being torn asunder by a ferocious storm that is little remembered today—because so many of its victims were immigrants to this country.
Review:  I was ready for a historical fiction and this one seemed like a good choice, especially since I am someone who tends to like survival stories. Except for some reason this story only sort of worked for me.
Yes, the book has the word blizzard in the title, but for me there was too much weather. And perhaps that's on me. I will say that the descriptions gave a really good accounting of just how cold, sudden, and awful the blizzard was, how difficult it was for people to find their way, and how devastating it was. That was done well, but I found myself skimming chunks of the book.
There were also quite a lot characters who told their version of events and some seemed like extra. For example, Anette's storyline is important and good, but I didn't need chapters from her mother's perspective or the woman who was her "boss." There were also characters I wish we'd heard more from.
All of that said, there are things that I think the author did well. The story moves at a good pace, she built tension about who would survive and who wouldn't, and I liked the inclusion of letters between the sisters and weather postings/news articles. The historical aspects of the novel were really good. For example, showing how young teachers were (16!), school conditions, and life in the Great Plains. The descriptions of farm life and life for women were also really well done. I didn't know much about Norwegian, Swedish, and German immigrants from the 19th century, whey they came to the US, and how they chose the mid-west.
One aspect of the book that I found interesting that I wish had more attention was the Native American boarding schools and how their children were treated. The author touched on this through the main character's sister, showing how terrible the schools were, but also showing that she was torn between taking care of the Indigenous children and honoring their culture and knowing that "they need education and to learn how to live in our world."
Challenges for which this counts: